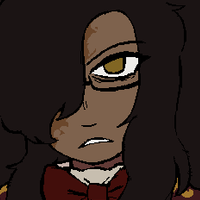 (this part needs to be rewritten so ignore it)

Antinomous is a generally level headed and reserved individual. Keeping to himself and only opening up to a select number of people who are able to gain his trust. After one has earned this trust and love the bond is nearly lifelong and unbreakable. Even in times of betrayal or hurt Antinomous finds it difficult to bare resentment. His loyalty to those he cares for is intense and deep even to a fault. To those he is not close with he may come across as cold and distant perhaps even hostile at times. He does not care for meaningless relations and navigates the social world clumsily closing up when people approach him unprovoked.

Blood family ties mean nothing to him as he was belittled and abused by his father since a young age. Antinomous believes strongly in forming found families and is extremely family oriented in this sense, as he will do everything in his power to do what he for them. He does not understand why people care so deeply for blood familial bonds.

His morality is grey as he does not believe in a true ‘right or wrong’ to the world. This causes conflict between him and many of the people he comes across and thus he often chooses to not speak of this belief he has. Though he may not believe in morality he does not use this to act senselessly, recognizing that in fact a large portion of the population follows these rules and mindsets.

Not one to take the lead or speak his mind strongly Antinomous is a follower of the person he becomes dependent on. Doing and following what they say almost without a second thought and is incredibly docile toward them essentially treating their word as gospel. He is unhealthily dependent and falls apart over time when he does not have a person to latch himself onto and look to as his guiding light. To him the bond with this person is everything and prioritizes it above all else even his own personal goals. He is driven by a deep seated urge to serve and protect those he cares for even when it affects him negatively. Though he is able to function somewhat well enough on his own he is at best and full potential with another by his side.

Antinomous is largely afraid of most everything about the world constantly battling with and anxiety and paranoia. He deals with this fear by closing himself off and not allowing others to see how fearful he actually is, remaining stoic and apathetic on the surface. He is plagued constantly with nightmares of all sorts being subjected to grotesque monsters, death, illness, rape, loneliness, and more. Some of which follow him into the waking world as both in the form of sleep paralysis and fully lucid hallucinations. The intensity and frequency of which they occur is dependent upon his mental health. With this in mind Antinomous tries to keep a positive outlook on life to keep these occurrences at bay.

Sounds, textures, and visuals are easily overbearing to his senses. He finds much of the world to be extremely overwhelming often becoming overstimulated in the process and not knowing how to handle it causing him to either shutdown or lash out when he doesn’t mean to.
-
Combat and Nen

During his training period in nen Antinomous sacrificed half of his sight in order to achieve greater potential in his abilities, thus resulting in the loss of one of his eyes. Ultimately this act proved to solidify his earnest resolve to his goals.

Antinomous's aura has a deep carmine hue to it, wavering at the edges and seeming as though it is unstable in holding its form. Despite it's appearance Antinomous is a rather skilled nen user, especially in offensive means. Most notably making use of the technique shu, encasing his cane with aura during combat. Unless Antinomous is aiming to kill he often does not unsheathe the blade hidden from within his cane. Hatsu is usually used as a last resort during battle as he does not like to expose his abilities unless necessary.
On top of shu, Antinomous decidedly focused on making use of en as well to make up for his hindered eyesight. He is able to extend the reach of his aura up to a 500 meters (0.3 miles). When nen users enter the radius of his aura they will feel a deep unsettling sensation about them almost as if something is preying upon them.
While both agile and a hard hitter Antinomous lacks a strong defense and takes much damage when hit and is least skilled at making use of the techniques ken/ryu.

Kurapika
Antinomous has been designated to a position akin to a personal bodyguard and caretaker to Kurapika. Originally being hired into the Nostrade family to fill in for other bodyguards post encounter with the Phantom Troupe. Over the course of his employment he grew to have feelings more personal than just being a caretaker to Kurapika, allowing his guard to fall around his higher up. Eventually it seemed the same on Kurapika's end had been reciprocated. Although, no words about the existence of either of their feelings have actually ever been acknowledged beyond a deep and strained friendship. Both dance around the subject avoiding creating a tenuous balance of professionalism, romance, and fellowship.

Melody
Both Antinomous and Melody undertake the position of ensuring Kurapika's mental and physical wellbeing each taking him in arms to support him as to not allow him to fall. This aide and understanding allowed for Antinomous to appreciate her company, her soft and placid demeanor harmonized well with his own quiet and flat exterior. Her gentle words coaxing him out of his shell and quickly become one of his favorites in the family. He holds some romantic feelings for her though to a lesser degree.

Pyaitnam
(In an alternative universe timeline from his canon story)

- Has a deep voice for a woman and high for a man
- Used to conceal his face with a mask post eye removal, eventually growing to come to terms with his scarring
- Actually rather friendly despite his odd demeanor and lack of social prowess
- Can often be found fiddling around with their hands or touching things in general
- Grooms themself often, washing his hands, brushing his hair, cleaning his glasses, etc
- Is very bad at expressing his emotions in a natural manner, they come out strained, and painfully if theyre especially potent
- Bloodstream is riddled with parasitic offspring from his nen beast
- Massive growth spurt was led by his nen teacher, Quill (used in enhancement in order to achieve this)
- Despite what most believe Antinomous is only partly a man, they are both a man, woman, and neither

Uhhh i cant think of anything else brain juice empty

- colors dont have to be exact but please do not lighten his skin tone!
- you are free to embellish his clothing however youd like so long as it generally looks like the ref
- do not be afraid to draw his scarring! he is not shy about it
- (green outfit) 16-18 y/o and is 5'7, can also be drawn without the bandaging as he did not lose his eye until his nen training
- (red outfit) 18-20 y/o and is 5'10
- (blue outfit) 21-current and is 6'0

Antinomous is able to manifest nightmarish beings in order to aid in combat
The range of abilities that come from these creatures are nearly limitless as they are based upon the targets own fears and nightmares.

Those formed of the opponent are much stronger but may only be summoned at night
While also being much more powerful they also do not listen to commands after being summoned, the conditions of what they are created for are set forth beforehand which they will then carryout until being defeated, recalled, or until sunrise


Conditions and Limitations: Nen beasts formed of his own mind are free to be summoned at any time of day but are less versatile. In order to summon a nen beast from an outside target Antinomous must have used either of his latter two abilities on said person and these beasts may only be summoned at night and last the duration of the night.

With this ability Antinomous may summon a creature to sit atop a target who has been knocked prone or supine
This ability causes full-body paralysis to the target so long as it stays atop the afflicted. The creature will drain aura from the target in order to weaken them

In this state any fear response will serve to enhance the effect of the summoned beast, sapping away aura more rapidly and becoming heavier and more threatening in appearance. If the target continues to respond negatively other psychological effects may begin to develop such as an intense burning sensation on their body, the feeling of being unable to breathe, stabbing sensations, etc.
No actual damage is inflicted upon the body.

Conditions and Limitations: Antinomous cannot make physical contact with the target nor can he move past an eyeshot distance from the target otherwise the effect is immediately lost

Dream-step: He Walks Among You (Specialization)

In this state Antinomous’s body is put into a state of ken but is otherwise completely vulnerable to all outside interference as in this time the only person who may pull him back into the waking world is the participant when they themself awake.
Alternatively, Antinomous is vastly more powerful in the dream realm and can inflict real harm upon the sleeping participant if he so wished.