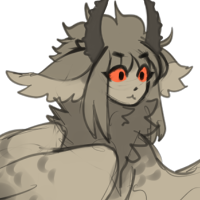 A deity-idol for the neverending cycle of death and birth. They are an efficient hunter with the most keenest of eyes.

The biggest problem is that he doesn't even know he's tasked with the heavy burden of being in-line for 'ascension of consciousness'-- becoming a deity.

He's sentient but he doesn't speak humanoid tongue, and due to his chosen status he has been exiled by his own kind, and instead taken in by humanoids, and given tribute. Even after all that he has been through, he is extremely clueless.
If Ceidr doesn't shape up and take proper responsibility, he'll be purged from his world by the God that rules before him... Which in turn would complete the previous God's cycle of existence, and end worship of life and death entirely (which in turn would end the world, with the following deities for other aspects of life crumbling to dust but shhh nobody knows about all that)

TRIVIA AND NOTES:
-Ceidr likes to lean toward male pronouns.
-He is very big... He is NOT all feathers+fur and is alarmingly muscular underneath it all dsfhhdfghhfg,,, Luckily for all of us, we'll never see him plucked and shaved
-They work best when hunting at night (those peepers aren't just for show).
-Often dressed by the humanoid worshipers. But he prefers to be 'naked'.
...And much like predators are with noisy clothes, Ceidr is excellent at adapting around forced, jingly and shiny outfits-- and only grows stronger hunting without these accessories.