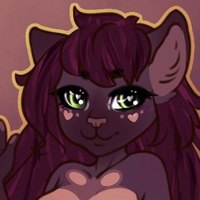 • Completely romantically clueless. She has a hard time knowing someone is interested her unless they tell her. No amount of flirting (unless it's blatantly sexual, but she'd be uncomfortable with that) will get her to notice. But once you do get there, she's still clueless, but that's more likely from lack of experience.

• Very timid at first. With everything, really, but people mostly. New people are scary to her. Even with people she's close with, new situations get to her. Despite this innate meekness, she very much enjoys intimate activities with those she's comfortable doing so with, and is very submissive in those activities. Although, while submissive, she does like to put up a fight. ;)

• A bit kinky. Not anything extreme or uncommon, but not entirely vanilla either. She enjoys being dominated, choked, somewhat restrained (mostly only her arms, not being able to move her legs causes panic attacks), and "fighting" against her partner. If it's been talked about and agreed upon beforehand, no doesn't always mean no with her, as well. Her preference is men much larger than her, but that doesn't mean she doesn't like anything else.

• Hates cities. Too many people, they smell gross, everything is packed together.. she just doesn't feel safe or comfortable in cities, or even large towns. She much prefers the calm and quiet of small towns or wilderness. Less for her to be aware of in her surroundings is more relaxing.

• Collects everything. Leaves, stuffed animals, gemstones, cool rocks, random shiny things, bones, so many things. Anything she can put in a shadow box, on a shelf, or just on display in general and make it look good. The stuffed animals? She just likes to cuddle them.

• Forgives too easily. Unless it's something that was intended to do harm, she'll probably forgive you. And she'll do it a dozen or more times for the same mistake. So if you manage to he t to the point she doesn't forgive, you should probably rethink the decisions that got you there.