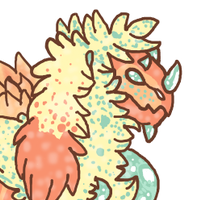 This Pokemon tend to linger in areas where virtues strive. It is said that this Pokemon often feed on these virtues in order to fight off the vices that taint it.

Eqeness is a particularly odd Pokemon. For one thing, she belongs to the Cosmog line. She started off as a 'Cosmog' and eventually became a ‘Cosmoem’. However, instead of meeting the requirements to evolve into a Solgaleo and Lunala, the female evolve into a Eqeness. Her evolution into a Eqness seemed to center around being supposedly being fused with something known as ‘Pureness’. It is unclear what exactly 'Pureness' is. Some suggest it's a Pokemon. Some say it's something that it's something more than a Pokemon. It is unclear what is truly the case. What is known is that this 'Pureness' is what transformed Eqeness to who she is now.

A fun fact to note is that Eqeness names come from the combination of Equus+Pureness.