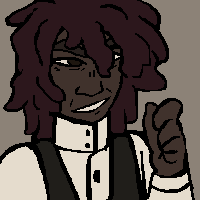 Quill was assigned to be Antinomous' nen teacher following the passing of his Hunter Exam. During this time Quill houses his student within a vacant room located at his home. He is well known for his simple and generous but firm nature. Often speaking in flat terms and not leaving much to interpretation as he believes its imperative to be as transparent as possible.

Payback: Reap What You Sow! (Enhancement)

Upon taking an attack Quill can return the received damage with double the amount of power directed right back to the opponent.
This ability also works with damage received from nen related attacks.

Limitation: This ability can only used as retaliation, meaning he cannot be the first to make a move.