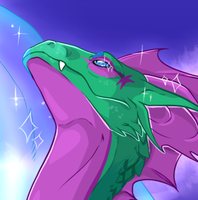 PHYSICAL NOTES :
-blue wing is made of space-like nebula-ey magic
-blue wing is usually only summoned during flight, or to show off her powers. it is semi transparent and feels warm
-her missing wing is on her blue side, her left side. When not summoned, she just has a numb of feathers on her left side.
-her markings are the same on both sides, just one side is green, the other blue
-sturdy
-long tail