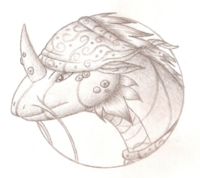 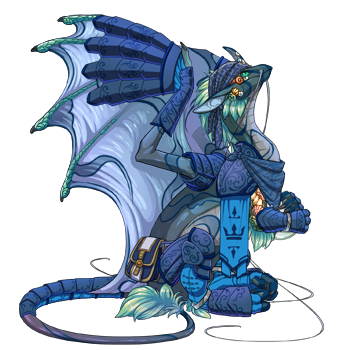 Eidiel was born in a bit shady circumstances, as she doesn't remember ever belonging into any clan before Seafoam. All she can recall is that she was always wandering around with an older Pearlcather who didn't have a pearl with them. Unfortunately young Eidiel and her caretaker got separated while fleeing from some beasts, which lead her asking for a place to stay when she stumbled across Seafoam clan's lands.
After joining her current clan Eidiel soon became good friends with two other adolescent dragons, Auer and Faelten. They all had their differences, but they never bothered any of them, until they grew mature enough to pick a mate for themselves. That's when Eidiel and Faelten - a Pearlcatcher and an Imperial - started to compete from Auer's attention. The long and awkward wooing race finally ended when Auer decided to be paired with Eidiel.
After that the relationship between female dragons was sour for a good while, but nowadays they can get along with each other, which is good considering they were trained to become the main Coliseum team of Seafoam clan. Eidiel works as an elemental caster of the team and grumbles under her breath whenever Faelten (the healer of the team) gives her a dozen of reasons why keeping Auer in good health is her main priority.