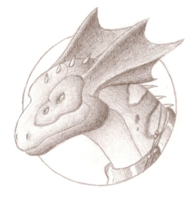 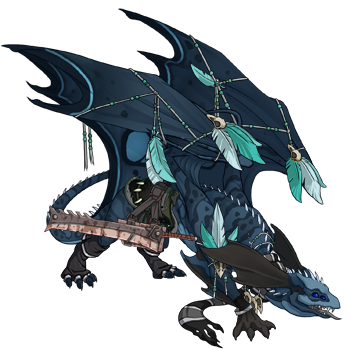 Rumble, who was born as a Guardian, was always very close with his older sister Islayn. At some point Carran pressured her son, who was named Kyron back then, to leave to his search like every honorable Guardian should do. Kyron/Rumble thought it was just a stupid old tradition but left anyway, only to return after a few unsuccessful weeks. After his return to home Kyron found out Islayn had been exalted during his absent and that made him furious. He dove straight into the Leviathan trench and aimed to force Tidelord to give him his sister back. He dove deeper and deeper, until he couldn’t see a thing and he felt his lungs collapsing. Finally he blacked out from the sheer water pressure.
After that Kyron was found from the shore. He was unconscious but otherwise unharmed - except that he had been turned into a Mirror. Everyone thought it was Tidelord’s doings, but different dragons had different opinions about whether it was a blessing, a curse or some other kind of sign. Whatever it was, it made “reborn” Kyron change his name into Rumble and unwillingly let go of his sister.
As Rumble was never interested in becoming the Seafoam clan's next leader after his mother, the title was passed on to his younger brother Mirach. Instead Rumble was assigned the responsibility of preserving food for the clan's storage, although he spends just as much time avoiding his duty as actually doing it.