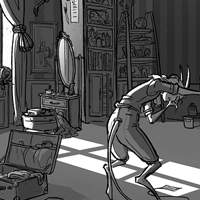 A summary of background information up to the beginning of their current campaign.

Glee spent roughly 70 years hidden away in the Daointhiel household in Har, only allowed days outside under their father's illusory magic. They grew up sheltered but well-read, and were especially close to their mother. When a letter threatening to go public with the family's secret was delivered, the family split, with Glee and their mother disavowed.

Eventually hooking up with a traveling circus act, Glee earned their keep with their musket, and the two kept each other company in their new life. When illness caught up with Glee's mother, they were unable to secure the funds to care for her, leading to her death. Glee now adventures with an eye towards finding a fortune to care for future family.

The second child of Venlaith and Wranrin Daointhiel, Glee simply came out wrong. A potential wrench in Wranrin's plans of upward mobility, the actual nature of the couple's newborn was kept quiet: servants sworn to silence under what power Wranrin could hold over them, and hidden from the rest of the world under lies of fragility and illness.

Glee grew up with the curtains of their room permanently drawn and doors almost always locked. Not knowing any other sort of existence, they took it as a simple fact of life that their family could do things they could not. By the time they were old enough to recognize the fact that they were inherently different from their family, they had internalized it as a fault of their own: something to atone for via good behavior and subservience.

They were always closer to their mother than their other immediate family. Wynril, their older sister, and Wranrin tended to keep them at some distance, while Venlaith was the only person that truly eased their worries. Not as concerned with the potential for this scheme to go horribly wrong, Venlaith tried her hardest to give her secondborn a life even within their confines. Since Wranrin refused to risk giving them the same sort of tutelage Wynril received, Venlaith educated them herself: the arts, literature, history, the sciences, anything they could get their hands on they devoured. While it wasn't up to par with the sort of schooling one would expect of their family's station, they made up for it with the sheer enthusiasm with which they read.

When they had exhausted the family library of everything they could find interest in, a revolving door of hobbies began. Anything they asked to try Venlaith provided, within reason, and Glee took to dabbling in mechanical and magical dabbling most of all. Not a spellcaster by any means, they were fascinated with it regardless, and found the idea of merging the two particularly interesting.

While all this was going on, Glee continually tried to impress Wranrin and Wynril with anything they could: a new painting, poem, gizmo, anything they made they'd try to show them in hopes of currying favor. They were occasionally rewarded with days outside the family's residence, disguised as a proper high elf by Wranrin's illusory skills. These were often trips to the Har shoreline, since the lie that they were being prescribed sea air for their continued "infirmity" was comparatively easy to make.

These days out, whether they were to the shore or smaller garden parties or simply out and about Har, were highly treasured. Their limited experience with the outside world led them to finding each and every aspect of it wonderful, and this was heightened when they met Sylquin Xilonodel. Forming a friendship, mostly based upon letter-writing, Glee was starry-eyed at the first person with whom they'd really talked outside of their family. With Sylquin formally trained in various arts, polyglot, and moving up in the world, Glee considered themselves extremely lucky to be in his presence.

Eventually Glee spilled their secret to Sylquin, who used it as leverage to move the two's relationship into more romantic territory, arguing that it would be only proper considering the weight of it all. At the time, Glee saw nothing wrong with this, and was thrilled with the seeming lack of negative reaction.

A few short years afterwards, around Glee's 70th birthday, Wranrin broke the news that they were to be disowned completely. When pressed for a reason for it, he produced a letter threatening to go public with the family's secret if such a thing were to continue being kept under Har's nose. Wranrin argued that they'd raised Glee as best they could and that something like this was bound to happen eventually, and that maybe it was best for everyone that Glee be left to experience the world. Venlaith refused to let them go alone. She decided that since Wranrin was unmoving in his decision to have Glee removed from the family, she would go with them.

The two were sent off with a small sum of gold and whatever they carried with them, leaving behind a distraught Wynril. The disappearances were written off as Glee finally dying of their congenital "illnesses" and Venlaith returning to her family's estate to recover from the shock.

They wandered for an amount of time, until their pockets started looking grim, at which point Glee took on work with a traveling circus. In their childhood tinkering they'd managed to make a sort of magical musket, a curiosity which they supplemented with a talent in trick shooting. They enjoyed the strange sense of stability and community that came with the job, as well as the travel.

They kept in touch with Sylquin all while this was happening, sparingly seeing him when the opportunity presented itself. Glee remained as infatuated with him as the day they met, only growing more so when he didn't drop them as their family had.

This continued for several years, Glee growing more used to the outside world and taking on their adult, more celebratorily tiefling name in the process. It was chosen with an eye toward their main desire of keeping their mother's spirits up since they still, deep down, blamed themselves for the misfortune that had befallen them both.

At a certain point Venlaith grew suddenly ill, obviously requiring some sort of care outside of their current means. Glee wrote to both Wynril and Sylquin for help, but received a response only from Sylquin: a harsh letter telling them to mind their place and not ask for something so unreasonable. Venlaith died soon after, leaving Glee heartbroken several times over.

Cutting themselves off from everyone, Glee took to mercenary work and adventuring. They made their way north and west from Wehna, eventually leaving the country as a whole and aiming to create a newer, happier, more stable life for themselves in the long-term.

At present, Glee isn't sure who to blame for the sudden downturn in their life. They have half a mind to blame Sylquin for the blackmail, but have trouble reconciling it with the affection (however small) they were shown. The other half of them has trouble blaming anyone but themselves, though they harbor a strong resentment of their father for bending so easily to some stranger's demands. Of their remaining ties, they miss their sister most, and have some small hope of reuniting with her.

They hold a small silver raven charm as their most valuable possession, as it belonged to their mother and her family before her.

Glee's high elf mother, who came from a long line of nobility in far northern Wehna. Of the family, she was least concerned with their social position, though this could have come from an upper class coddling: she likely had no idea how hard life could be outside castle walls until she was forced to experience it firsthand. She cared deeply for both of her children, but spent an uneven amount of time doting over Glee, in some attempt to make up for a lack of paternal affection she knew her firstborn was already getting.

She kept her spirits high after the family split, but quietly kept a deep-seated vengefulness towards her husband. She wrote to Wynril as much as she could during the latter part of her life, though could rarely receive any sort of reply.

Glee's high elf father, Wranrin came from a nouveau riche family, and used his wife's heritage to solidify his current position. He was primarily concerned with climbing the social ladder, though this was partly due to wanting a good life for what children he would have. When Glee was born, he couldn't do much more than imagine that all going to pieces, and has felt an ounce of resentment for his child ever since. However he couldn't stay completely distant, as much as he tried, and showed his affection via allowing them outside under a disguise of his own making.

He didn't expect Venlaith to leave with Glee, and considered it making a much bigger deal out of the situation than it needed to be: he would have kept in as much contact with Glee as possible, and intended to help keep them on their feet, though whether he would have followed through with that is up for debate. He feels guilt over the whole situation, especially given Venlaith, in her anger, cut him out of her life so completely. However, he still believes he did what was best in the circumstances. He's also under the belief that both his wife and child are doing well enough, wherever they are.

It's possible his family was involved in the pact, several generations back, that resulted in Glee.

Glee's high elf older sister, who is as much a ladder-climber as her father. She sees herself deserving of a higher station, and threw herself completely and totally into her studies in order to assure that eventual rise. At first, she didn't see what the big fuss was about, but under the influence of her father's worries, began to resent her sibling for the potential of throwing all her plans and effort away. This resentment only grew when they became favored by their mother, which culminated in Wynril anonymously blackmailing her own family into disowning Glee. She hadn't expected Venlaith to also leave, and was sincerely beside herself when it all happened because of it.

She largely blames the rest of her family for how things turned out: if they had just acted as she thought they would (that is: logically) everything would have ended well. She blocks out the sense of guilt in the back of her head with a strong belief that she acted as any other person would in her situation, and has refocused herself entirely on gaining power and wealth in Har.

She received Glee's final plea for help, but in a vengeful fit ignored it, and hasn't communicated their mother's implied end to anyone out of a combination of denial and fear. She assumes Glee will have the sense to stay away from her and her father, and is trying her best to forget about them completely.

Glee's high elf ex, who saw them more as an exotic pet than anything else, and took pleasure in the fact that they idolized him so completely. He sees no point in thinking further about them, considering them having overstepped their bounds with their request for help. He'd already lost most interest in them by that point anyway, and has moved on to bigger things.