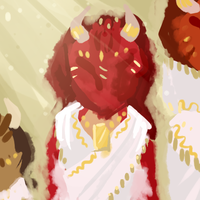 Quirinn hadn't worn anything so formal since her wedding. Veils and saris adorned her body perfectly, to the extent that if she wasn't standing still and poised, they would simply fall to the floor. She was used to clothes like this, but what was slightly off-putting was the colour. Usually dyed with the most expensive, vibrant purples and reds, they were instead a drab, ghostly white. The colour of mourning. Even the golden accents seemed duller than usual.

On one side was Priskan, no more than 3 years old and trying his darndest to stay strong. Quirinn could sympathise, she went through the same thing when she was forced to witness her father's death. On the other side was her mother, a head taller with grander horns, and detailed makeup around her eyes to emphasise her stoneheartedness. On the far side, her brother. Clearly only there for appearances. They all stood in the royal circle, an audience surrounding them consisting mainly of wealthy and respectable dragonborn. Directly ahead, stood Savull. His head below an eloquently engraved golden guillotine.

Savull was an interesting case, a golden dragonborn born to two non-golden parents. The Queen instantly saw this as a gracious omen and arranged for him and Quirinn to be married at once. Perhaps more than anything eager to introduce golden dragons into the family once more. They met only a few days before the wedding, entirely by accident. Savull was wandering the palace when Quirinn stopped him, demanding to know who he was.

He had a shy, genuine smile that burned in Quirinn's memory forever as he introduced himself. They got talking that night, under the stars and by the light of the fire, the air felt warm and as the hours passed the dragonborn curled closer together. Savull's family were a branch of royalty, so far removed that they were now irrelevant - nobles by name, but not by wealth. He had always dreamed of living as a member of genuine royalty and had spent his life looking forward to the day he could meet Quirinn and spend the rest of his life with her. Of course, he knew of the family traditions, but a few years as part of the most important family in history versus a lifetime of insignificance... it was an easy choice. They fell in love that night. Quirinn found out she was pregnant a week after the wedding.

Sadly, it was yet to be. Quirinn fell ill soon after, bedbound and feverish, barely able to eat for a solid month. She remembers is as one of the worst months of her life, every moment sick and hungry, but worst was when she asked about her child, and the look of despair and pain from the nurses said everything. Conspiracies flew, especially from the Queen, that Savull had poisoned her (after all, his life was dependent on the child's), but nothing was proven and Quirinn refused to investigate it.

Regardless, within a few months Quirinn was pregnant again. Although at one point she found herself similarly getting ill, it was much less severe and soon she gave birth to a healthy, golden boy. Holding the baby dragonborn in her hands was a surreal feeling - something so gentle and fragile, yet so powerful. She held her brother when he was a baby, but this was something... incredibly different. She still remembers when he opened his eyes, and his tiny lips showed a toothless smile. Then and there, Quirinn knew she would protect this child as long as she lived. As she felt the warmth of Savull curling around her, she longed for this moment to last forever. She almost suggested running away - just the three of them, living happy together. But no. She couldn't do that, it was her duty to stay, and she couldn't forsake everything her mother had taught her.

And now, that honour had led to Savull's death. As they parted ways - Quirinn to the royal circle, Savull to certain death - they held hands and embraced each other one last time. Tears welled in Quirinn's eyes but didn't budge beyond that, her throat lunging out her mouth begging her to say something that would end this, but her mother's glare from behind her kept it in place. Priskan wasn’t there, he had said goodbye the night before, but he didn't quite seem to understand the significance of what was happening until the morning. Quirinn was snapped back into reality when she felt Savull's claws leave her hands, and the gentle sliver and finely decorated gold vanish behind the door. He left smiling, fully accepting his fate and as if telling Quirinn it was okay, but it left little comfort. After a few silent minutes, they were ushered to the circle to witness the execution.

As Savull was loaded into the guillotine, a white dragonborn priest - the same one that had officiated their wedding, spoke of the Quirinn family traditions - and a string of religious text that fell death to Quirinn's ears. When at last he finished, he stepped off the stage, leaving only Savull and the executioner. The following moments were painfully quiet and seemed to last a lifetime, as she felt her breath slow and her heart beat in her throat.

Then he pulled the trigger.

And sliced through Quirinn's heart.

The bang of the blade reaching the base echoed in Quirinn's ears.

Internally, she felt her insides riot. Her breath deepened through gritted teeth as her throat lurched and her mouth ached with every desire to scream in anguish. Her hands clenched as if realising they would never hold him again and reaching desperately for something to comfort her. Her mind went numb as the last moment played again and again, desperate for... something. Maybe a hint that this wasn't real, that this wasn't as bad as it seemed. Her eyes ached from holding in tears, and her vision blurred so much that all she could see of her former lover was a blob of gold being hauled away. She wasn't even sure if she could stand anymore, she just wanted to fall to the floor in despair.

Outside, she stood and posed and sophisticated as ever, with barely a movement besides the glimmer in her eye.

To her side, Priskan was breathing heavily, trying hard to hold back tears but in a childish body where that was physically impossible. She felt a waft of respect for her own son to hold together like this, she knew she didn't when her father died. To her other side, she saw her brother walking away, and her mother turned to her. Through the tears, she could make out her expression, as stony and heartless as ever.

"Your grandfather wasn't strong enough for this, and I was worried you wouldn't be either. I'm proud of you," she spoke. Quirinn had strove for her mother's approval all her life, but now her words just felt hollow. She wasn't proud of herself. "Don't worry," her mother continued, looking to Priskan, whose tears were, despite everything, streaming down his face, "the first time is the hardest." With that, Priskan reached out a hand, with Quirinn took almost without realising. It was soggy.

"Now, come with me. I have another husband arranged for you. You must keep an open mind however, he is human, but incredibly wealthy..."