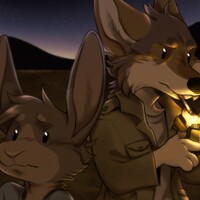 Perturbed by the lack of any rainfall for months in the Central Grasslands, one conspiracy theorist stormchaser bunny starts to seek the truth for himself.

Gonzo found himself surrounded by messily-annotated maps and notebook paper pinned to corkboard when the lights came on. The two were packed into an adjacent closet with an exposed bulb and its drawstring dangling overhead, Calhoun up against the wall and Gonzo in the doorway.

Calhoun's posture had grown stiffer, a far cry from the slacker slouch he showed at the Rest Stop. He'd wriggled out of his jacket and tossed it on the walk in, and Gonzo got a good eye of his long, lanky limbs and how tall Calhoun towered over him. His perpetual smirk had since flattened. Gonzo could hear him preparing himself for what knowledge he had to give away.

"I was in the military for four years. I don't like them. I think they're a bunch of idiots. So...make of what I'm gonna tell you what you will."

"Yeah. Seems like it's working." Calhoun held his finger out to the map hanging on the east wall, of all the military bases in and around the Central Grasslands region. "It's not every base, mostly these five." The map had five locations in a spiral circled, initialed, and connected with red marker lines.

Indeed, "Garfield" was crawled in next to one of the circles. Gonzo's jaw dropped.

Calhoun took a deep breath and continued. "You see, I was about to leave it alone. I go find smashed out cars in the desert and fix them up and sell them. I do alright. And then the rains stopped, and I remembered hearing my major asking on the phone if it was possible. So I went looking."

He leaned over, pointing out a grainy printout dangling from a corkboard to the left of the base map. "In the late 70s, the UN proposed a convention called ENMOD, so countries wouldn't try to change the atmosphere as an act of war. It's all energy. Storms are energy. Blast something up into the jet stream and detonate it, and you can create a monsoon. You can use that energy to redirect a storm too. They could turn Siberia tropical if they really wanted to.

"We signed onto it, but it only prohibits using weather weapons against another state, not your own. You still have your old gear lying around, you don't just decommission it."

"W-well..." Gonzo was at a loss for words. His eyes stayed fixed to the forts circled up on the wall. "Why would they want their own country to dry up?"

"Companies work all over the world, you know. They have no state sovereignty."

"They're colluding. The government takes all the rain away. Your dinky little farm dries out, crops are dead. You sell it to a big company—" Calhoun made a big, sweeping gesture with his hands then— "—suddenly torrential rainfall! Record rainfalls! Flash floods every two weeks! Farm does better than ever.

"The company splits the profits with the government halfsies, and everyone makes their millions. Except for us. We lose land. We lose economic security. We lose freedom."

Gonzo seemed distraught, caught in the nauseous in-between of belief and disbelief. "It—can't be that bad, man, can it?"

"And you said they were idiots!"

Calhoun shook his head. "An idiot's scarier than an assassin. The assassin shoots to kill. The idiot might slip."

Gonzo slumped right where he stood, staring at the mess of paper lining the walls and whimpering. He was no stranger to conspiracies, but it was another to have one confirmed to him, by someone who was in the military no less—and to be directly affected by it, and to have no recourse against it. He could see it now: families fleeing, scattering from what used to be hearty little communities and hundreds of acres of farmland across the Great Plains. Fights breaking out over the last gallons of water in the region, some turning deadly. Gonzo wasn't sure where he'd turn up himself. Somewhere else in the country? Another country?

At long last, Calhoun leaned up off the wall and broke the silence. "How old are you, Gonzo?"

Calhoun hesitated to answer. "Sometimes, you sign up for something that sounds like a really great cause. And then all your superiors turn out to be idiots. Then you wonder what you're fighting for. And then it hits you: you're fighting to turn everyone you loved into a serf.

"I was there to maintain the planes. And one night, I, uh—cut the fuel lines on half the fleet, so they couldn't go anywhere. I didn't kill anyone."

"Thanks. You know..." Calhoun's smirk started to return, and Gonzo perked up seeing it. "I might still have clearance for the base."

"Yeah? What would you need it for?"

Gonzo's eyes shot open, and his heart pounded in fear at the thought. "Go look inside? We'd get murdered!"

The coyote blurted out into a fit of laughter, punctuated by horribly dry, smoky coughing. "Those guys are always on a smoke break. They're not gonna see us!"

"They have guns though!"

"They're for looks, basically. No one wants to fire on a civilian like you, it's bad for optics."

Calhoun shrugged. "They might recognize me. Might make them wanna shoot more! Look, I'm not saying we go in and play with their toys, but you came to see the base and I might still be in the scanner database. Once in a lifetime chance. You wanna go or not?"

Gonzo was still horribly shaky and anxious at the thought of what might happen if he were to get caught trespassing on a military base. It's not that he didn't believe Calhoun about the lack of danger—well, maybe he did, maybe he didn't—just that Calhoun had a bit of a bias, or—maybe a lot of a bias. Still, he was right. He'd never been inside a military base, especially not one where he could see anything like weather warfare up close and personal.

ENMOD is real, by the way.