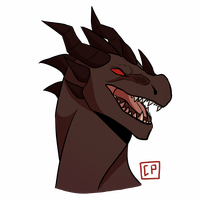 Xan is a brown/dried-blood-red western dragon that is part of The Draconic Empire (check my Literature page).

He was previously a member of the Royal Guard, which is responsible for guarding the Emperor's Palace, and being a general representative of the strength of the Empire in cases where he is instructed to travel. He retired from the guard after many years (a currently undefined amount) of service, and lives as a mercenary soldier in what time that he's not spending on something like engineering or the arts.

Overall he is a thoughtful, smart, gruff, but otherwise relatively gentle individual. He can be strict and demeaning when necessary. His time in the Royal Guard inspired him to continue to be a wayward beacon to others, representing a standard of living that others should aspire to have, and so he holds himself to incredibly strict personal judgment. Even the slightest mistake will often have him angry at his lapse in judgment. Unfortunately, he has a tendency to project these requirements on other people, albeit with less severity. He does it more out of habit than anything.