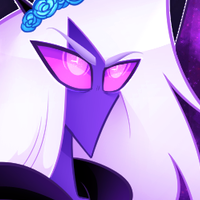 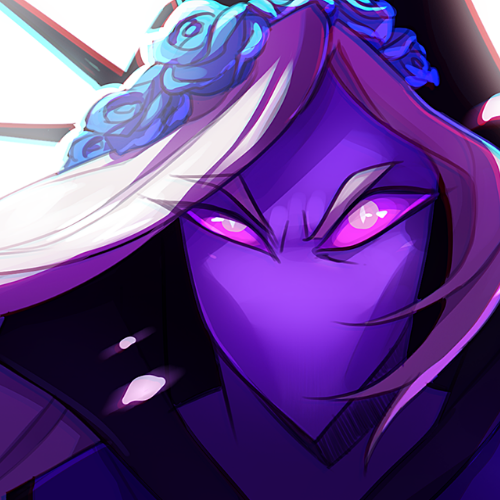 Entrophia is, to any normal person, an extradimensional monster. On the surface, she acts as a poised and collected individual, and handles many terror inducing situations with a controlled ease. Many of her reactions to things are restrained, even bordering on uncaring. She typically conducts herself very strict and business-like an unwaveringly fearless, and it is rare for her to drop this. What lies beneath this attitude however is a tangled web of hatred and rage. Her temper is quick, and her presence commanding. Thousands of years in the Nightmare realm has corrupted her patience and twisted her mind into that of a hellish beast. Her calm demeanor can easily fall into shambles when things don’t go her way, or if proven wrong.

Entrophia is also predominantly very pessimistic. She does not believe people do kind things just for the sake of being kind, a typically believes the other party has ulterior motives. She has closed herself off from any form of affection, mostly out of her dislike for showing vulnerability, but also as a defense mechanism against getting herself hurt. She is highly distrusting of others, and she has not opened up to another person in eons. There is nothing she despises more than pity from others.

Her status as a Nightmare Lord comes with its drawbacks. Being surrounded by the worst fears of mortals, and seeing all of their terrible and disgusting thoughts for so long has drained her faith that people can be kind. It has made her very negative, cold, and isolated. She has not felt a kind touch or genuine affection in a very long time. She does not realize how terribly lonely and sad she really is. The fact that her fellow Nightmare Lords do not take her seriously does not help, and it has damaged her pride severely. She uses her unimaginable hatred and power to fill the holes of pride and company, and uses it as an excuse for making others feel as terrible as she does. She deeply envies those that live normal lives in reality, and seeks desperately to justify her existence.

Despite all of this, she has a soft spot for children, and is at least matronly if she ever encounters one. She also tends to tolerate those with equal intelligence as her, and does not mind educated conversation with such people. This also goes for people with similar interests to her, such as literature or music. She does not openly consider anyone a “friend” however. Furthermore, while she is not incapable of emotions such as love or affection, it is not something she prioritizes, and shys away from it more often than not out of fear of intimacy. Despite this, it still may be possible under the right set of circumstances. In a hypothetical situation, she can be easily flustered if you happen to meet a certain set of requirements and play your cards right or if you happen to be a certain grumpy paranormal investigator.

In her human appearance, Entrophia is a tall androgynous woman with an angular face and sharp nose. She has long white purple-tinted hair that goes past her thighs and black eyes with purple irises. She also has rather thick eyebrows. Her outfit is a casual rendition of her true forms ensemble, a purple hoodie and pants.
In her “formal attire”, Phia’s skin is a very saturated purple. Her eyes turn a bright pinkish-purple and her fingers change into claws. Two massive wings sprout out of her back that seem to reflect the night sky, and are decorated by two large blue circular eyes. There are similar eyes on her thighs and shins, as well as one on her chest. On her head are five thin black pointed spikes similar to horns, which are typically joined by blue flowers. She also usually lacks a mouth and nose. When she does have a mouth, her tongue is a deep purple and unnaturally long.

Subriden [ENEMY - HATED] [▶]
Entrophia hates and deeply misses Subriden simultaneously. She resents him out of her own petty reasons and refuses to believe what she did to him was wrong, and feels complete justified in her actions. Despite this, he is the one person she had ever felt a genuine familial connection with outside of her kin, and deep down there is a hole in her heart that he once filled. They are more similar than they would both like, and despite their hatred they understand each other more than most.

Sladecosa [BOSS - FEARED] [▶]
Despite Entrophia's status as "Queen of Nightmares", there is only one other person she serves, though not willingly. While both are two ancient and dark forces of nature in the world, Slade greatly eclipses her in power. While of course this certainly infuriates Phia, she detests her more for turning her into what she is today. Slade plays an immense part in ruining Phia's life, and twisting her mind from something innocent to something horrible. To a human, their relationship may seem something similar to stepmother and daughter.

Libidine [COWORKER - HOSTILE]
Like most of the nightmare lords, Entrophia's relationship with Libidine is strained at best, although at first glance it may seem more like bickering friends due to Libidine's extremely lax nature about pretty much everything. Phia regards him mostly as an idiot, but is also disgusted immensely by his licentious tendencies and especially by all the weird snuff films he collects. She wont admit it, but there's a part of her that fears that the concepts and love and affection are all supposed to be as how Libidine portrays them. Because of this she is weirded out by physical affection.

Phantasmagoria [RIVAL - DISTRUSTED]
Phantasmagoria and Entrophia's relationship is possibly one of the weirder ones out there. Entrophia is immensely annoyed by his strict regulation of dreams and nightmares and seemingly random encyclopedic knowledge of the inter-dreamscape laws, but doesn't quite hate him as much as she does others. Unless he tries to interfere with her goals of course. His spontaneous personality confuses her often, thus tries to remove him from her presence as quick as possible. She found out long ago she can't simply kill him, so flinging feathers at his skull is the next best thing.

Dominantur [COWORKER - NEUTRAL]
Unlike most of the nightmare lords, Entrophia and Dominantur get along with each other more than any of the others. Phia would trust him with many important tasks, and the two have a friendly rivalry pertaining to a certain pair of mortals. Occasionally they'll gossip, or even spend an afternoon drinking weird nightmare tea and chatting about plans of world domination. There has been gossip among lucid before that the two were courting each other, but Phia has swiftly put an end to those rumors.

Xeluneth [COWORKER - HOSTILE]
Entrophia and Xeluneth's cold and bitter hatred goes back many decades. The two often throw insults and threats at each other, and everyone in the nightmare realm is aware of their hatred for each other. Phia's distaste for Xelu stems from the dark unicorns incomprehensibly big ego and tendency to mock Phia for her multiple failures. Many years of these verbal wounds have not helped Phia's already damaged pride. Not to mention, Phia is very aware of Xeluneth and Sonaitus's plan to eventually overthrow Phia for her title as Queen.

Sonnaitus [COWORKER - HOSTILE]
Aside from Sladecosa, Phia hates Sonaitus more than pretty much anyone. It is no secret that Sonaitus plans to challenge Phia's rule eventually, and Phia has made many plans to prevent this from happening. In the past the two have fought physically and it has not ended well for either of them. Alongside Xeluneth, Phia has endured many venomous words from the dark duo. Despite her hatred however, she does wish to try and unite the 7 of them, and if that means making peace with her most hated enemies, so be it.

Incognious [COWORKER - NEUTRAL]
Although Phia does not get along with most of her fellow Nightmare Lords, she truly cannot really define her relationship with Incognious, mostly due to the fact the massive dark lobster man rarely ever speaks and tends to not have a strong opinion on anything that goes on in the Nightmare realm. However she does appreciate his indifference somewhat, as he tends to listen to what she tells him to do.

Dentagula [COWORKER - NEUTRAL]
Entrophia first and foremost sees Dentagula as wasteful and extremely lazy. The two aren't quite hostile with each other, but aren't quite friendly either. While Gula doesn't take Phia too seriously, he also doesn't mind all the leftovers and useless lucid she tends to feed to him. Phia has admitted Gulas usefulness as a trashcan in recent years, but still heavily dislikes his messy and unprofessional nature.