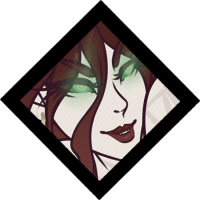 OF FIRE & BRIMSTONE.
“ Does the deer forgive the wolf ? ”

A tall & dark elf, clad in heavy leather & bearing ankle - length
scarlet curls. Her blazing felfire eyes stand out as much as her
attire. A thick sensation of Fel magic engulfs her — a corruption
deeply rooted, as evident on her body.

Pale of complexion, & covered from head to toe at all times.
Chains & leather straps line her body all around, giving loud
clinking sounds with her every move. A face built of sharp
features, always held in a scorching frown.

SKIN.
“ My roots run deep into the hollow. ”

EYES  / /  Zevhara's eyes have been tainted with the fel for the majority of her life. They glow faintly, an intense green, at all times, but flare up whenever she channels her magic. Her eye makeup is always dark & dramatic ; a thick eyeliner & long, black lashes.

HAIR  / /  Long locks of deep scarlet red cascade down her back in beautiful waves & curls, long enough to reach past her knees. It is rarely kept in any updo or style, & it tends to cover her face partially.

SKIN  / /  Very pale skin with little to no imperfections ( Safe for one beauty mark to the left of her mouth. ) Her skin is quite well taken care of & soft to the touch. Her body is littered with scars of all sizes — the biggest ones can be found on her back & torso, some of which reach all the way from her neck to her hips. The skin around them is slightly rougher, though they have long since healed. Her face, however, bears not a single scar as of now.

BUILD  / /  Zevhara stands taller than most females of her kin ( 170cm / 5' 6" ) & has a body build of curves & elegant features. Long, slender limbs, a shapely hourglass figure with slightly wider hips than shoulders. Her face is nothing but well - shaped ; from her chin & jaw to the bridge of her nose & her cheekbones ; her features are sharp & memorable.

CLOTHING  / /  While no longer a lady of nobility, she likes to adorn herself in textiles of utmost quality. She will typically be seen wearing layers of blacks & golds, perhaps with white collars, scarves, or ties. Zevhara's body is always covered from neck to toe, & she never wears anything but full length sleeves. She prefers heavy clothing & will typically wear two to three layers. She is also often found wearing tall leather boots & long matching gloves ( Even when she is not, her hands are rarely naked. )

JEWELRY  / /  She has several piercings in each ear, her earrings usually being gold or metal rings & studs. She wears a total of six rings on her fingers, all of which are gold. She doesn't often wear jewelry apart from this, but she can sometimes be seen wearing a metal chain necklace.

SCENT  / /  Thick smoke. Dark floral. Sulphur. A thick sensation of Fel magic engulfs this elf. It is the immediate overhanging danger surrounding her, the telling of pain inflicted. She has an affinity for the heavy floral perfumes & incense. Underneath that, & the Fel corruption, her natural scent is of warm soil, sun - touched hay, apple tree branches, a tint of ash, smoke & scorched earth.

MENTALITY  / /  Zevhara is an incredibly distrusting elf, & she doesn't allow herself to rely on anyone but herself. She is cautious & guarded. She is passive unless provoked, although she does have an incredibly short fuse. When angered, she becomes hostile & volatile & is best left to herself. Needless to say, Zevhara is not a fan of people & she avoids social interaction if she can.

FEARS  / /  More than anything, Zevhara fears her own death. She will go to great ( & selfish. ) lengths to ensure her own safety before anyone else's. She's afraid of losing anyone she cares about — & she fears opening up & committing to others because of this. She's also afraid of deep waters & drowning, as she cannot swim.

TROPES  / /  Black Sheep, I Did What I Had to Do, Manipulative Bastard, Playing with Fire, Psychoactive Powers, Too Kinky to Torture.

This section is a heavy WIP.

Zevhara's family were once proud magisters of Silvermoon City. It was seen to that she too received proper training in the arts of magic.

Katheryn is someone who has caught Zevhara's interests, &
while their interactions range depending on their moods,
Zevhara finds Katheryn's company quite pleasant. They are
on the same page about their relationship, & they both want
nothing more than what they currently have.

Zevhara has recently been allowed into Katheryn's office in
Booty Bay & she spends quite a bit of her time there — drinking,
mostly. & entertaining Katheryn when she gets tired of work. She
has made a habit of keeping the office somewhat tidy, the way
Kath likes it to be — although she doesn't make this obvious.

The two have a rather turbulent history. With Zevhara breaking
Arshalia's heart & not speaking to her afterwards, there is a lot
of tension between the two elves. Zevhara finds Arshalia's bubbly
attitude both charming & an annoyance, but she tends to humor
the priestess when they do cross paths. Arshalia is someone
Zevhara would consider a friend, if she weren't so set in her ways.

Zevhara is incredibly awkward around Eurephys. She isn't sure
whether to trust her or not, because of her complicated past with
Katheryn. While Zevhara doesn't want to get involved with their
internal drama & whatnot, she's found herself caught up in it a few
times.

Apart from this, however, Zevhara does find Eurephys interesting
enough. She is pleasant enough on the eyes & unlike most, hasn't
done anything to annoy the warlock out of her mind . . . yet. She
could be a potential drinking buddy.

Zevhara simply finds the paladin stuck up, rude & insufferable !
She cannot stand the sight of him . . . & not just because his aura
is blinding ! This might have something to do with the fact that
Varan interrupted her having a good time, or had the gall to
touch her ( let alone carry her ! ) or just the fact that Zevhara was
careless enough to slap him. Most likely, it is all of these reasons
combined.

Parts of this code was made by Wicked