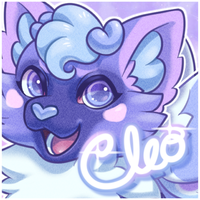 NameCleo the Pixie Pouflon
Basics
SpeciesPouflonPronounsShe/HerageTeenBody TypePixieHometownCitremaryOccupationMage Student
Cleo is a small but exuberant Pouflon, brimming with energy and a zest  for life that can be quite contagious to those around her. Her optimism  and positive outlook keep her in good spirits most of the time, and she  is known in her community as the go-to Pouf for those feeling a little  bit blue in need of some cheering up.
Her Story...
Despite being such a bright, happy young Pouflon, Cleo had a rough start  to life. Her mother died when she was very young, leaving her to be  raised by a local orphanage. Once she reached her early teens, some  cruel incidents led her to run away from the orphanage, taking with her nothing but a doodle she did of her and her mother to keep her company.  The first few weeks on her own were terribly lonely; she found a small  enclave under a pier where she set up a makeshift home, a damp but  relatively safe place to sleep after long days spent looking for food  and work. Despite it all, Cleo never gave up trying to find a new place  to call home. During the day she would travel the beach, combing for  trinkets and pretty shells which she sold in the bustling market place above. After a time, she had saved up enough to begin a mage training  course, and things began looking a little brighter for the sweet little  Pouflon.
Her present...
Despite being such a social butterfly, Cleo doesn't have many close  friends, though she keeps an open mind that one day she will find  someone who loves chatting with her as much as she does with others. Her  biggest dream is to expand her travels farther out into the wonderful,  wide world, and find a friend willing to accompany and explore alongside  her.

DianaMentor, Housemate
Cleo met Diana in the Citremary marketplace, and quickly charmed her with her bubbly personality. When Diana discovered Cleo's interest in magic, she brought her on a trip to Riddlelock to explore potential schooling options. When Diana realized Cleo had no way to afford tuition or housing near Riddlelock, she took the young Pouflon under her wing, and into her own cozy cottage near Marshgrave and Redwick forest.