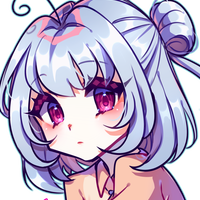 Hanemin is a human witch studying in a Wizard Academy.
Abandoned by her parents at a really young age, she grew up with wild animals, mostly birds. Because of this abandonment she will never be able to forget, plus humans treating wild animals inhumanly, she grew with a certain disdain towards humans, seeing them as cruel, selfish and ignorant. She gets to study in the Wizard Academy after a fateful encounter, initially starting by taking courses from afar, still not wanting to get affiliated with humans. Eventually however, she has to study inside the academy and teams up with other students she will get to trust more with time.
Hanemin's personality seems to be what we could consider ambiguous. To a few, she's "cute and shy", others see her as "quiet and wary" while some think Hanemin just hates everything and everyone, and getting involved could be no good. Despite not talking much to the students, and actually disliking them at first, most of the students, oddly enough, seem to be fond of the girl, or at least don't mind her. Being unaware of how the world works (and still learning supposedly "obvious" things she couldn't learn by growing apart from society), making her learn and discover new things is often interesting, although it can potentially be risky as well.
Hanemin is gifted with "possession" powers, which thankfully allow her to feel and understand others a bit more. She also has a few familiars, the main one being of the birds who raised her in the past.