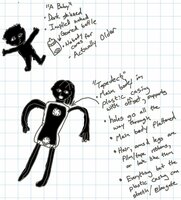 Well, "A Baby" doesn't seem a particularly good name. So we'll stick with the heroic alias.

"A Baby" can hide in the shadows - perhaps even their own shadow - either unobserved or ignored. Whites of their eyes staring out. They frequently can be seen to carry what looks like a clear plastic bottle.

In the dream, they were a normal girl - or perhaps woman - previously. All their attempts to regain previous stature meant becoming half as thick while twice as tall. Not exactly a Flat Stanley Scenario.

When it's time for heroics, The bottle becomes a clear plastic shell with to gears in it - one through the chest, the other near the edge at the crotch. The case looks a little like doll clothes extruded into 3 dimensions; flat viewed from the side, only a few centimeters thick, but more human shaped when viewed from the front or back (1). Tapedeck's skin looks more like magnetic tape, her limbs ribbons of it flowing out (2), her hair more loops of tape, while her head is more proportional and solid. This limbs can extend and retract. "hands" can appear anywhere on the arm's length, still made of the tape, while feet are more indicated by the shape. Her skin tone has the range of magnetic tape, including reflectivity.

Is there a transformation sequence? Maybe. I'll link (3) anyways.

In fiction, she's https://toyhou.se/8294956.virika-khanakarii 's OC. Due to this there are a few tropes to be paid attention to: