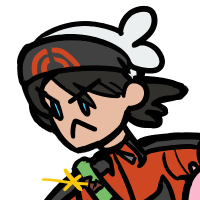 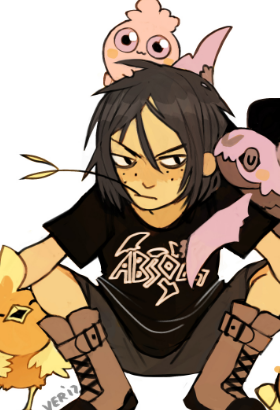 The tough little guy who maybe isn't that tough.

"Beast" is a Pokémon trainer. He's about eleven years old, acts like a very Tough Customer to everyone, and usually gives his Pokémon Tough Names like DESPAIR FANG and SKY TERROR, but he only keeps baby Pokémon, can't bear to evolve them, and though he wouldn't want anyone to know, he dotes on them tenderly, is super protective of them, and is unbearably proud whenever they win a battle.

He has shoulder-length black hair, freckles, blue eyes, and usually several band-aids from misadventures on his team's travels. (If you want to draw him, feel free to draw him in any clothes you think suits him; it definitely doesn't have to be the default trainer clothes!!)

He's the little dude I play Pokémon games as when I want to use a male player character. He's traveled in X, Omega Ruby, Moon, and curently Ultra Moon.

His team, as of Omega Ruby: Huckleberry the Seedot, Freyja the Ralts, Pearl the Igglybuff, Phoenix the Torchic, Scylla the Mantyke, and Doomwing the Noibat.

Fun fact about Beast's origins: "Beast" was my nickname for my late cat, Cookie. I often named male video game characters after him, and in Pokémon X&Y the game asks you both for a name and a nickname, so while "Cookie" was my character's name, I didn't realize that... everyone in the game was going to call him the nickname I put in, "Beast." It was ridiculous and so Beast, the gentle trainer with the tough names, came to become a character all his own, and I've always loved playing his journeys since.