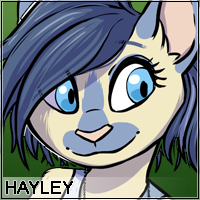 Her Own Claws, Swords

Hayley was born and raised in North Fancia. Both her parents were very religious and worshipped The Cat, with her mother being a nun half-angel and her father being a minister at the local church. It's no surpise that Hayley inherited their religous veiws from them and closely follows The Cat, allthough since joining the cat-runs she begins to queston wether her faith is well-placed.
As a child, Hayley adored the cat-runs, especially their leader Gruchiano, she longed to join them allthough this was mocked by many people her age. She was constantly discouraged from trying out - she was good at school and her becoming a cat-run was seen as a waste. Her father was more interested in her twin brother Bryan following in his footsteps. But of couse, fate had other plans. Hayley eventually became a cat-run, allthough Charlie interviened when she was being judged by The Cat, so it's questionable wether her position is entirely worthy...