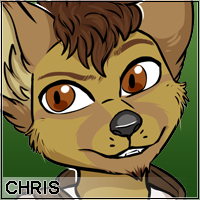 The early years of Chris' life were unfortunate - he was born in a favela to a neglectfull single mother after a pregnancy she hoped would be a misscriage. He was forced to look after himself, and though he was less than 10 years old found himself involved with gangs and had to steal to survive. After an unfortunte incident involing a gun, Chris was forced to run away from his 'home' in South Fancia, eventually taking refuge in a church of The Cat.

The minister of the church, Captain Jaquez (a former captain deputy) scoffed at him and demanded he left, allthough his wife Mariana took pity on him and wished to help him. Mariana won, and Chris was taken under the care of the church - he would be fed and kept warm for as long as he continued to preform daily chores. Each day Jaquez would rigirously tell him about The Cat and how he belived in equality and good faith, and that Chris would be rewarded for what he did. Allthough it was meant to give the fennec more faith, it only made him belive in The Cat less. After all, no good god would let a decent person such as himself suffer.

However, one day the latest deputy of cat-run, Captain Demgen, visited the church. While Chris didn't want anything to do with him at first, he insisted on talking to Chris, and eventally convinced him he would make a good cat-run. Chris was almost excited to becoming a cat-run, until he found out Jaquez wanted to be his mentor. His reasons were unclear, it seemed that without Jaquez Chris would have no change of becoming a cat-run, allthough he only seemed to want him to suffer more. Either way, Jazquez left retirement, being given two apprentices, Chris and Cleo, to care for.

Chris and Cleo soon became quick friends. Cleo was shy and poor at portugeese, while Chris was overzelous and joyful. The two matured together, became captains together, and even trained and thought together. Chris also made two other good friends in Sydney, Cecil and Chloe, who all stood by him as he lost his first apprentice, Willow.

A few years later, after the unfortunate death of Demgen, Cleo was chosen as the new deputy of cat-run, leaving Chris... welll... in the dust. Their partnership seemed to come to an end and their relationship was strained, and Chris felt more or less alone. That was until he met his newest apprentice, Hayley, and a great friendship blossomed.