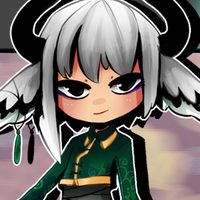 Not getting what he wants, property destruction, messes, flies, thieves (if he can't catch them), when people step on his tail, stains, blood, having to get his hands dirty, profanity.

Barazia is hard to figure out. He's always cool, calm, collected, and relaxed. He takes the time to think about what he says and seldom loses any amount of his composure. He doesn't allow others the time or data necessary to figure out what's going on in his head, so most are forced to assume his exterior is all there is to him.

Barazia is defensive, possessive, and greedy. He doesn't like others touching what he owns, and his definition of ownership is "I saw this, so now it's mine." He'll claim both inanimate objects and living beings as his property, even if he doesn't do anything with them. He's particularly fond of keeping (attempted) thieves and tormenting them, as one would expect from one of the Princes of Hell.

It's not hard to get Barazia's attention; as mentioned before, the second he sees something he's claimed it for himself. Of course, this isn't exactly the foundation of a healthy relationship, not to mention that he "claims" so many people (and often just for a brief span of time) that eventually he forgets about previous catches in favor of winning over the latest one. That's all well and good if you're not interested, but if you wanna catch that flag you'll have to put in more effort. He's very used to shallow relationships that consist of other people providing him companionship so they can indulge in his wealth for however long, so the best way to grab his attention is to express genuine interest in not just him, but his interests as well.

Barazia's life was fairly uneventful. He gained control over a larger percentage of Hell than any other of the Princes of Hell, had everything his heart desired (until he tired of it and sought more), overthrew Prince Mammon, enslaved Mammon and took everything they owned... really, just ordinary demon stuff. He led a luxurious - if not somewhat dull - existence for millennia, and then one day something... interesting happened. Prince Asmodeus (informal name Aurevieste) and Prince Belphegor (informal name Iliese) went missing, just like that, leaving their land and armies behind. As tempted as Bazaria was to take it all for himself, he was more interested in who could have possibly slain them both so quickly. Power like that had to be his.

It took two years, but eventually he discovered that Iliese, tired of Aurevieste's antics (he certainly wasn't alone on that front), moved to Earth and sealed Aurevieste away. Not long before Bazaria came along, a human girl named Yarisa Elision managed to transfer Aurevieste from a necklace into the body of a human boy named Marron Siealus... and said boy also happened to be dating Iliese? How could a human be able to move a demon's soul so easily without sacrificing their soul? How could a human win over a demon's heart so severely? Thoroughly intrigued, Bazaria decided he'd have to find a way to claim these bizarre mortals for himself.

Bazaria has pyrokinesis, hydrokinesis, and aerokinesis: the ability to produce/control fire, water, and air, respectively. He can resist heat, breathe underwater, and fly with ease - though he's sensitive to the cold, earth magic, and anything holy. Rumor has it that his tail is the source of his power, but no one's ever been able to cut it off to prove it.