Favurn is a hybrid wolf demon. He is quick to correct those that say he's simply a 'wolf demon'. He's a hybrid. A wolf hybrid of what, he doesn't know, BUT HE'S A HYBRID. NOT JUST A WOLF DEMON, DAMN IT!

He was captured close to 20 years prior, for an influx of human eating and village terrorizing. He's made acquaintances in The Cages, and has ultimately mellowed out his bloodthirst for humans as the years press on. Almost calling a few of them his friends, despite being behind bars.

Favurn has known Rikkal for at least 10 years of his imprisonment and Rikkal was always kind to him. He's warmed up to him over the years and receives special treatment for good behavior, including good food and extra time outside.

Some demons would call this 'Pet' behavior, but Favurn assures those accusing that he's only being 'good' because it makes his life easier. That the first sign of escape, he'd kill any human that stands in his way.

This is put to the test, however, when the kingdom is attacked and the demons released. He finds himself protecting Rikkal from his fellow escapees. He's wounded in the fights, but eventually finds his way out of the kingdom and away from the attacking horde, finding himself in the presence of Malka and is quickly influenced by his enchantment, truly becoming the 'Pet' to Malka, as everyone always accused him of being.

He's contempt watching others having fun as he watches quietly far off. he's  more likely to poke fun at someone when others are poking fun at the same person, or he'll keep pestering them just get a rise out of them, and will laugh it off. it's all rather playful and teasing.

His demeanor isn't malicious, but he'll talk about slaughtering a village of tasty humans without battering an eye, as if it's the most normal thing to talk about in front of a human. So those who may have fallen under the impression that he's just a big talking dog thing, will quickly realize he's actually a pretty fearsome beast with little to no remorse.
Though, throughout the novel, he changes a bit when he befriends Rikkal, so he's not as willing to kill for the sake of enjoying a good meal, as he used to. I'd say he's sarcastic at times.

He also likes to make Rikkal fall over by brushing up against him too quickly/heavily.

sarcastic, gets mad when people call him a dog. He specifically tells people HE'S NOT A DOG. HE'S A HYBRID.

Very large, quite a long and narrow snout. biiiiggg huge paws/claws. puff of fur around his chest, black or dark saturated blue, with flecks of red in his fur. or just black/bluish and grey flecks.

his ear's are straight up, and, depending on whether he is with Malka or not, he's got a big tunnel ear piercing in his right ear, with a chain link that goes to a spiked collar.

his eyes can be all black and glazed. or sort of like shan yu's eyes from mulan.

little horns on his skull/forehead, above his eyes.

his tail is quite bushy, like an ant eater tail.

his snout is quite long, and his teeth are very prominent.

There comes a point where Favurn and Rikkal escape from Malka together, and Favurn is oddly effected by Malka's power that remains in him still, so he starts taking on characteristics of Malka without realizing it.

He feels the need to be humanoid, or at least have opposable thumbs thumbs!

Despite Rikkal's protests (Rikkal doesn't want to involve an innocent person who will probably die from this procedure, or deface a corpse), Favurn seeks out a temporary spell, that allows him to possess a corpse or a living human body.

It's simply grotesque and a brute force way of being humanoid, but he lives as a strangely looking humanoid for a few days until the body literally falls apart due to prolonged use.

His beast form sort of explodes out of the body. blood everywhere, its gnarly. Rikkal is repulsed and rather horrified.

- As he wears the human skin, features of the beast that he is will slowly overtake the natural humanoid form. For example: his long bushy tail, may only show itself after a few days of wearing the human's skin, as his regular form is sort of getting ready to get out of the humanoid body - like a lizard turning pale when it needs to shed it's skin.

he just looks like a creepy guy, with features that look eerily stretched on the skin of the body he's wearing. his ears pointy, too many teeth in his mouth, messy unkept hair. maybe some stubble.

His human form would look different, every time he possesses a human and his features take over.

Finds him kinda funny. Doesn't understand/nor care about Bulrig's unsightly and perverted behaviors. Though others seem put off by it. It doesn't mean much to Favurn. He often gets long lectures from Bulrig about how he's 'missing out' on the joys of good humanoid pleasures. Favurn will just roll his eyes.

The two share a fairly sarcastic and joking relationship.

When the kingdom falls, and Favurn protects Rikkal from death- thus earning the distrust and attacks from other demons, Bulrig saves Favurn after he falls wounded, and keeps the other demons off him, convincing them that Favurn can be reformed. Bulrig joins the forming horde, and tries to bring Favurn with him, but he refuses and runs from Bulrig. The two will likely never meet again. 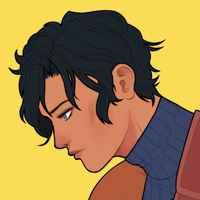 Favurn doesn't like to show it, but he truly has a liking for the human. When demons bring this up around him, he is quick to respond that he just likes the extra food Rikkal brings him from time to time. They're just jealous he gets more food...

Later on, after the kingdom falls and after leaving Malka, Favurn becomes increasingly overprotective of Rikkal and doesn't like to leave his side, making it difficult for the human to enter villages without cause of alarm. 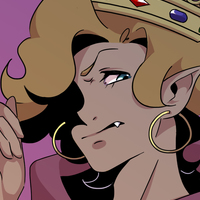 He's got a squeaky voice, and it honestly hurts his ears when the demon speaks. He doesn't understand why he likes him, but he does... He would kill for Malka... but why?? Lowkey kinda likes Malka petting him. But would rather Rikkal pet him instead.
View More