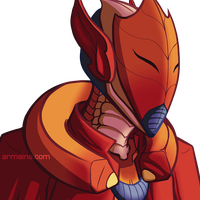 Assumed by many to be a mercenary, however, she much better fits the description of vigilante, particularly the Masked Hero kind. Her identity is completely unknown, her only identifier being the recognizable armor and symbols she bares. To her credit, she does live up to the title of 'Hero', as all known sightings and activities involving her have been for the sake of the help and safety of the general public. While there have been attempts to sabotage her name or leech off the good will she's built, impersonations are dealt with quickly and publicly to ensure the status of her name.

For all the public knows, she is humanoid in form and completely covered by armor of some kind, completely obscuring any skin color or face. Her most recognizable suit is the Orange and Teal-accented suit she wears most often, but she also has a few other sets of armor for different environments. Her height is taken to be at about 6ft but it's hard to determine the exact height as she has her height as only ever been recorded while in her suit.

The rare times she's seen outside of her suit, not that anyone would be able to identify her, she wears full covering clothing and face-obscuring instruments, as much as she can get away within the given environment. Even her forms of identification use different names and all of them surprisingly legal.

There are multiple unique accounts of interactions with her, giving a personality range from quiet and stoic to friendly and even 'giggly', this has often lent to the theory the person known as Daga may be more than one person. She's rarely around long enough in a given instance in public to get a true indication of what the extent of her personality is like. Of course, enemies that have lived through encounters with her have simply regarded her as terrifying, those saved by her see her as benevolent.

As one would suspect by her lifestyle, she is particularly skilled in combat and espionage. Based on both survivor accounts and security footage, her combat has been described as fast, efficient, and even elegant but she has also been described as a brutal berserker.

It is assumed she has some significant knowledge in construction as none of her armor is tied to an manufacture, indicating all her suits and gear are self-made or there is a very well kept private contractor. Her technical knowledge is also considered to be at the very least, adept, in order to infiltrate ships and buildings as she has. It assumed she has ties with the more unscrupulous side of information brokering, as it's the only explanation that makes sense for how quickly and efficiently she's able to topple organizations and insurgencies.

Most of her reported accounts of activity have been linked taking down gangs, rackets, both small and large scale uprisings, and has even been linked to the exposing of corrupt businesses, law enforcement, and political leaders. Her skills are not 'for hire', many have attempted either failing to contact her in the first place or get turned down in the rare event they can find her. She has come to a few instances of personal aid, but never accepts money or trade for her services. She comes and goes as she pleases, with no discernible pattern in where she assists or whom she assists.

While most assume she lives a solitary life, it's been rumored by some that she has been occasionally seen with a tall cloaked figure. The interactions of the two together have often been brief or ill-fated for the viewer, so little is known about the companion and how close they interact. If she does have a life outside of the suit, it completely unknown to the general public.

Little is known about her past or even current state of events but she's been engaged in these vigilante activities under the identity of the name Daga for at least 30 years. They project that the age of the suit bearer, provided it hasn't changed hands, to be anywhere between 50-60. However, some believe the suit has changed hands at least once.

From what can be gathered, she does not work for hire, and rarely can be contacted at all for work. She has been reported to show up cases of another's distress, with seemingly no prior knowledge of the event. After assisting with the crisis, she leaves just as surprisingly as she arrived, with no payments made or out-right refusal of said payments if offered.

What is known, is that she has no home location, her only known place of living is her own starship. Additionally, she has clearance for every known star sector and planet, despite there being no record of her species or origin to be found. There have been several theories about this fact, but none can be proven to be true without the confirmation of certain high ranking Tonahon officials.