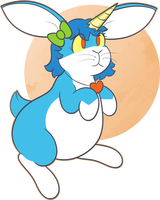 Clover was originally a human girl who spent a lot of her time reading and playing video games, especially RPGs. She was really fascinated with RPGs and could tell you all about the stories, and the worlds and characters within them. She'd fantasize about going to those worlds, and going on adventures that seemed much more exciting than her mundane life at home. She didn't have many friends, but the ones she did have were very dear to her, and she liked spending time with them. Most other people thought of Clover as a weird awkward nerd and didn't really want to interact with her that much.

Clover's life changed significantly when she found a weird necklace with a heart shaped jewel on it - it seemed magical, but magic doesn't exist, right? She held onto it, and kept it with her in the hopes of studying it and figuring out what exactly it was about, but no matter what she was never able to make any sense of it. Then one day while playing a Dragon Quest game, she slipped back into fantasizing about being in that world, and the jewel started glowing with lots of energy, and before too long she was no longer in her bedroom - she was out on the countryside...? What's more, there seemed to be weird creatures out in the distance... she walks cautiously toward them before making out a slime, silly smile and all. Did her dream finally, somehow, come true...? But her body felt weird, and she looking at herself soon revealed that she had become a bunicorn!

Clover had to figure out how to live in this new world - which was easy, when she knew all about it! There were so many places she wanted to go, so many critters to meet and see *in person* but after awhile she started to miss her old friends. She realized they were probably worried about whatever happened to her, and she made it her quest to figure out how to get in touch with them again, so she brought that weird necklace with her in the hopes that somehow she would be able to figure things out and reunite. She didn't want to go back to her old life, or even change back, but they were one aspect of her life she didn't want to go without.