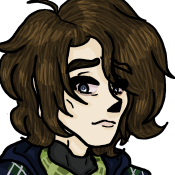 He has messy nape of the neck-length brown hair, typically parted to his left. Near the middle of his head on his part, he has a small cowlick. His hair is somewhat poofy, often silky despite its messiness. His bangs hang over the top of his left eye. He usually has dark rings around his eyes due to his warped sleep schedule, and his eyes are often bloodshot from pot-smoking. His skin is ghostly pale from lack of exposure to sunlight. He's about 5'8" (1.73 m) and weighs around tbe lbs (tbe kg). He's rather scrawny-looking.

Julian is anti-social and somewhat reclusive, but enjoys trying to fit in at parties. He hates himself and has chronic depression, with frequent suicidal thoughts.