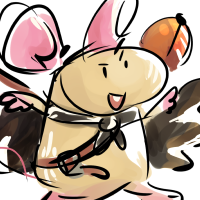 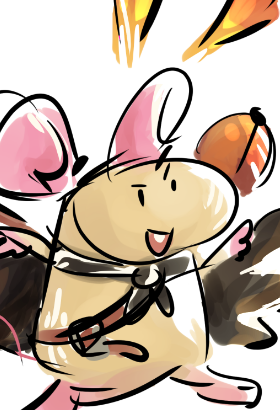 The tiny mouse who thinks he can solve every problem with bees.

This little guy was created for fun a few years ago when friends were doing a Mouse Guard RPG campaign, but he was never used for anything, so now he's here!

Bartolomeo-- or Bartolo for short-- is a small, angry field mouse obsessed with his bees.

After his apiarist parents were killed in the Weasel War, the young mouse swore furious vengeance; however the only option available to him was his parents' bees, so he became incredibly devoted to them. He considers them his best friends and spends most of his time with them, to the exclusion of most everyone else. They adore him and will serve as attack bees whenever the angry young mouse asks it of them. They also like it when he plays music for them on his lute.

Etheldred, a childhood friend elder by a few years, recommended he join the Guard as a healthier outlet for his energy, but, well... he's still Bartolomeo.

His full stat sheet and backstory for the campaign are below the spoiler cut (using the outdated name "Bartholomew"):

CONCEPT
I want a mouse who sees bees as the solution to every problem.

NATURE
Bartholomew saves for winter, having grown up storing honey and wax with his parents. He fights at any provocation and does not fear predators. His nature is 4.

TOWN
Bartholomew was born and raised in Lockhaven’s apiary. His skill is Apiarist and trait is Guard’s Honor, as his family was trusted by the Guard.

PARENTS
His parents were a respected pair of apiarists for the colony.

CONVINCING
His style is definitely that of an orator, although this is more because he will boomingly hold forth unto (loudly squeak at) anyone who stands still too long, probably about how great bees are. He is not terribly convincing.

APPRENTICE
After his parents were killed by weasels in the Winter War, young Bartholomew swore furious vengeance; however, the only option readily available at the paws of a young orphan of beekeepers was bee-themed revenge, and the lonely young mouse got very invested in his bees. He considers them his best friends and spends most of his time with the bees. They adore him for his uniquely doting care and will, in fact, serve as attack bees for him if he ever asks it of them.

Etheldred, a Guardmouse a few years his senior who had been a childhood companion and fellow apiarist, was a bit concerned for Bartholomew and recommended he join the Guard as a useful outlet and a way to get away from the bees. She persuaded him to apprentice with Cyril the insectrist for a change of pace of productive skills that was still agreeably in the stubborn mouse’s wheelhouse, but this may have just doubled his tiny legion.

MENTOR STRESS
After finishing his apprenticeship, Etheldred took him under her paw to mentor him herself, and tried to stress the Hunter skill as protection for the reckless, somewhat single-minded young mouse in an effort to not get himself killed, but this may be a lost cause.

EXPERIENCE
Bartholomew has experience in Hunter and Fighter (6 total)

RESOURCES
He still beekeeps for the Guard in winter (+1), his parents were apirarists (+1), he does not have any use for money or friends and therefore does not buy gifts (0), he is thrifty by definition of rarely using money for much of anything beyond necessities (+1), has never been in debt (0), and is too reckless and hot-headed to pack carefully before running into a situation (0). His Resource score is 5.

CIRCLES
He is not gregarious in any way (0), does not have family in the Guard, just his friend and mentor Etheldred (0), he has a... strange reputation among those who know of him, but nothing outstanding (0), has no powerful mouse enemies (0), has probably never been convicted of a crime (0), and isn’t particularly tough or cool but he is definitely a lone mouse who has little interest in the rest of his Guard patrol; he was placed with them in the hope he would be influenced away from that tendency (and bend his fearsome insect powers for the good of the Guard) (-1). His starting circles are 0.

QUALITY
Bartholomew is a tiny, tubby mouse who uses bees as the defense he cannot provide himself, so I’m ultimately going with Short.

FRIEND
Etheldred the Guardmouse is Bartholomew’s closest (and perhaps only) non-bee friend. They grew up together.

ENEMY
Bartholomew’s worst mouse enemy is Winnie, a mouse from his hometown who romantically rejected him once when they were young, saying if he loves his bees so much he should just marry them instead. He had the bees chase her out of town. She was OK, but she became a baker, like her parents, and makes sure to burn any bread he purchases. He eats it anyway.

CLOAK COLOR
Etheldred gave him a black cloak, as a fond reminder of home and his bees. She is completely unaware how deep the bee waters continue to flow.

INSTINCT
“I can solve any problem with bees.” If you run into Bartholomew in the local pub and happen to sit beside him, grousing about somebody or something that’s causing you grief as you nurse your honey mead, this mouse may be listening more attentively than you realise. “Can I solve your problem with bees?” he asks, as you laugh off the odd joke from the small, intense mouse. You aren’t laughing when you find your boss at the mill tomorrow morning covered in welts and irately demanding twice as much production out of everyone today.

GEAR
Etheldred taught him to use a short spear as defense against predators, and he also carries a lute. Shut up Winnie, the bees like my music.

SUMMARY
Bartholomew is small and intense and is much happier around bees and insects, or facing predators, than socializing around other mice. He is loud and impulsive and probably a disaster to be around, but he does know his stuff when it comes to the former, so he could be quite useful. 50/50 really.