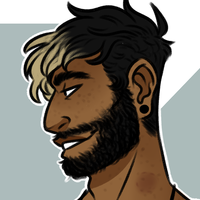 Isaiah is a fairly laid back person, choosing to spend the majority of his time either chilling at home or catching waves on his surf board. He also enjoys spending time going out with his few friends, often times hitting the mall and blowing his money with them. Said spending usually involves an entire closet's worth of clothes for Kiyung, and every new game he could possibly think of for Alistair. He dotes on his boyfriends and would do absolutely anything for them both.

Unfortunately, sometimes his chill exterior can crack, and he has a rather aggressive side that he hates to show, especially around his partners. He can be short tempered, violent, and brash. The only instance where this comes in handy is if he has to deal with someone who has been harrassing either of his boys, and even then he hates letting himself 'get bad' again. He frequently takes medication in order to supress this side of him, but sometimes if they’re forgotten things can go awry.