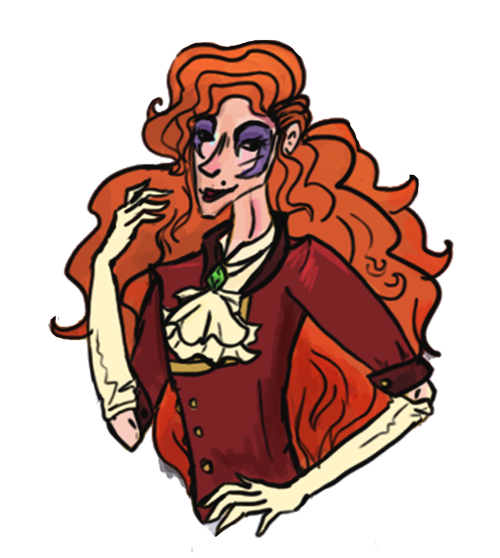 The most interesting man you'll ever meet...At least, he thinks so. Atticus is an eccentric objectivist scientist with a penchant for birds and chaos. It's unknown where he is actually from, or what his motivations even are. Hard to tell, to be honest.

He seeks eternal life, believing that he himself deserves it above all others, and will only allow himself to find such a goal without any help whatsoever. His other hobbies include fashion, kidnapping test subjects, flirting with cute bois, self vivisection, and gardening.

Flamboyant, loud, and classy. Atticus has flaming red hair that is far too long and decently curled. He keeps the left side of his hair pulled back, whilst the other tends to hang around his right eye in a swoop. He prefers bright makeup that takes up the area around his eyes and cheekbones, as well as heavy contours and deep red lipstick. Atticus typically wears formal attire, such as tailcoats, waistcoats, cravats, jabots, and silk gloves, but has also been known to wear flowing gowns, candy striper costumes, and, on occasion, burlesque. Gender roles mean absolutely nothing to this man.

Atticus existed at one point in place where he was born and grew up, with two parents he cares very little about. At a young age he realised that one day he would die. Fearing the inevitable, he sought out a scientific approach to ensure his immortality.

As a young man he completely disregarded any sort of collegiate path and instead self-taught himself everything he knows. He worked for some time at various labs, but was fired on more than one occasion for 'moral indecency'. Eventually he was sought out by a philanthropist who struck up a deal with him.

Finally finding a lab space to work on his own, without interruptions or 'morals', Atticus began experimenting on himself and some unlucky, but desperate, volunteers. This lasted for some years before his supply ran out.

Eventually he discovered something he probably shouldn't have and left. Some time later, he found himself in a place that did not make sense.