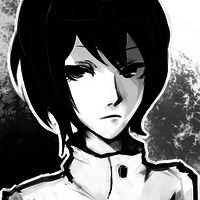 Somewhere in her 30s.

Opine, butterflies, large mirrors, bad parenting, dubstep, elevators, property damage (it happens a lot), heat, PokeGen, being stared at, untrustworthy people, when she tries to cut her arm off but the blade's not sharp enough so she has to keep digging in there and it's just messy and takes forever and wastes time, internet trolls.

Umbra comes off as cold, harsh, and emotionless. She likes to get things done quickly and doesn't care for distractions. She's difficult to get close to, and you probably wouldn't want to get close to her, anyway.

This is primarily a mask to get herself to be targeted, which will spare her allies and allow her to tackle obstacles she knows she can handle. She's actually rather amicable and craves companionship but has difficulties initiating conversation or anything that doesn't involve murder and intrigue. She's tsundere easily embarrassed and doesn't know how to handle compliments even though deep down she wants them.

Umbra is overprotective of those she's close to as well as those she perceives as weak. She's driven to succeed for the sake of others but doesn't have any goals or personal motivations of her own. She doesn't mind that, but she worries that failing to uphold the persona she's created will cause everything else around her to crumble.

Created by Halyn at 15 as a mostly blank slate, Umbra found herself thrust into being thoroughly educated on the nature of the Test Reality, Them, and the Competition. She spent a few years drifting and observing her future Competitors, trying to get a grasp on humanity by experiencing it through others.

Realizing she had no wishes of her own nor any desire to attain divinity, she decided she would dedicate her life to ensuring the other Tested had just as good of a chance at victory as she did. Guided by Halyn and impulses without origins she could define, Umbra began plotting the creation of the Oresses: a number of magical orbs that would grant powers to those who were assigned them.

As she planned out the Oresses, Umbra felt the need to become more proficient in her own abilities. She had the ability to manipulate her blood (which is a Tested's soul) and it didn't take too long for her to figure out she could utilize her injuries as an endless arsenal weaponry. Well, not quite endless, but pretty close to it if she had some kind of healer as backup.

Unexpectedly, creating the Oresses killed her. That wasn't too much of a concern given this was the pre-Competition world where she could revive no problem, but Umbra's accidental death led to the Oresses attaching themselves to every Tested who hadn't yet awakened, utterly destroying their memories (with few exceptions) and altering both their appearances and personalities. She took it upon herself to gather the Oress Holders and explain both their predicament and the Competition. She was faced with hostility, unsurprisingly, and decided to embrace it. Noting the hesitance of most of the Tested to partake in the Competition, Umbra decided to play the role of antagonist in hopes that giving everyone a common enemy would lead to a quick conclusion.

Having left Halyn and company due to creative differences, Umbra created her own meager alliance consisting of a little girl she found on the streets named Ara, an aggressive girl named Ciess, and Ciess' quiet Mirror boyfriend named Shan. Together, they slaughtered most of the Tested and became feared by all who remained. Eventually the alliance fell apart due to betrayal on Shan's part; Shan coerced Ciess into killing Ara and then tried to get her to help him kill Umbra so they could win the Competition together, but after killing Ara Ciess became overwhelmed. She broke up with Shan, killed him, then healed Umbra and killed herself. This left Umbra alone to fight the final Oress Holder, Unzeh.

After killing Unzeh, Umbra thought she won the Competition and killed herself to see the results, but as it turned out the winner was Kleigh: an Oress Holder who had the power over knowledge and hacked the Dead List to make it look like he was dead the entire time.

That's where the story and RP universes kind of split but basically everyone came back to life hooray! Except things are pretty awkward in the alliance now and they've gone through like 7 more Competitions that were all the third one. Opine is weird like that.

Umbra can turn her blood/soul into literally anything, from weapons to shields to expensive anime figurines. She's spent the majority of her existence honing this ability and her reaction speed, so she's pretty good with it to say the least. She grows in strength as she's attacked since she needs to be wounded in order to release her soul, meaning that unless you know how to draw out a fight against her without dying an instakill move is your best option. Fighting her is even more difficult since she's often paired with Ciess and Shan, who have the ability to supply her with nigh-unlimited energy and shielding, respectively.

Since Umbra's abilities rely on her losing blood and losing too much of it will kill her, a long battle is a death sentence for her if she doesn't have an escape route or allies to defend and heal her.

Being the creator of the Oresses means that they're all linked to her emotions as well as the emotions of the Oress' respective holder. She can use this to her advantage to weaken or strengthen a certain Oress by controlling her emotions, such as thinking about things she hates to increase Shan's power while simultaneously decreasing the power of Oresses like Lirna (happiness) and Entria (love).