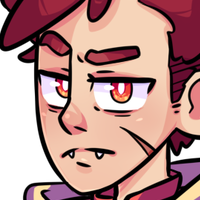 This character profile is still a WIP! 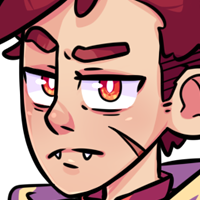 Bjorn was raised almost all by himself in the forest. He's learnt how to fight and how to hunt for food. He's had a terrible past and so he tries to avoid others to stop it from happening again, and he feels uncomfortable around people now. Since he doesn't confide in others he tends to be mean and hot-tempered. Bjorn is very athletic and kinda doesn't know what fear is. But the truth is that what he fears the most is his own Curse. Although he doesn't trust anybody, somehow he becomes really close to Angiris.

It all started with a War. A War for Freedom. People in Miraclewish were fed up with the Goddess' attitude and threats, but not many had the courage to do something about it. They were frightened. But one group decided to fight back, The Werewolves.

A mother, between them, didn't want to risk her baby's life and the night before the war she ran to the forest. She hid her baby there, surrounded by warm clothing and food. She didn't know if she was coming back, but there was nothing else she could do to save him. She was desperate. She'd stayed for a while, holding her baby tight to her chest. Tears began rolling down as she tighten him a bit more. She wanted to feel his warmth, one last time.

Time had come, and she had to leave. She sung a lullaby for her baby to sleep and then run away. She couldn't look back, she knew that if she did, she wouldn't be able to leave. And so she kept on running. Leaving what she loved the most, a little piece of herself.

War has ended. Victory was given to the Goddess, who had eliminated all werewolves...or at least that's what she thought.

There was still a little werewolf hiding in the forest. He was found by a villager passing by, a woman who wasn't able to have babies due to a medical condition. She instantly fell in love with the way he grabbed her fingers, with such a cute tiny hand, as soon as she got closer. She couldn't leave him there, she had to do something. She had to take him with her.

Bjorn looked like anormal child and he had been living with her for some time. She had adopted him and took good care of him. Everything seemed normal, until Bjorn was 13.

He started developing a weird behaviour, compared to the cute and sweet child he used to be. Bjorn was then a bit aggresive and quite hot-tempered. He could not control this and even had weird nightmares about some kind of monster.

His mother knew something was wrong and decided to start looking for a cure, asking around the village to see if someone could help her child.

One night, on a Full Moon Bjorn's agressiveness got out of hand, and he had transformed into a werewolf. While being in that state, he could not control what he was doing, it was almost like it was not him anymore. And this brought horrible consequences.

He suddenly started running around the house, breaking things. His mother didn't know what to do and just followed him around and begged him to stop.

Suddenly, she grabbed him by the arm and He pushed her with such strength that she hit a wall with her head, and fell unconscious.

As soon as the full moon was gone, Bjorn fainted.

When he woke up, feeling terrible. He noticed that some furniture was ruined, the door and walls were all marked too. He'd thought that someone broke into, and started looking for his mother.

He then saw her on the floor, barely breathing. He put his arms around her and inmediatly remembered what had happened.

Bjorn continued to say he was sorry while tears rolled down his cheeks. His mother put a hand on his head and stroke his hair. She said that she loved him but he needed to leave and to find a cure for his Lycanthropy.

Bjorn refused to leave her, but suddenly, villagers started banging on the door, knowing that something bad had happened. Bjorn's mother then pushed him aside and told him to run.

He hesitated for a second, but there was no time to waste. They would kill him if they knew he was a werewolf.

He gathered some strength and jumped through the window, dissapearing into the forest's darkness.

He had never gone back to the village. And lived by himself in the forest.

He also refused to interact with someone else, because of his curse.

Bjorn tried many ways to break his curse, but to no success.

Werewolves are given an Amulet when they are babies. They cannot loose it.

It's purpose is to give it to someone they trust, and their souls become linked instantly. This is because werewolves are destined to be companions.

That means that they'll need to protect each other and that they'll feel the same pain- whenever one of them gets hurt.

THIS IS A CHARACTER FROM MY COMIC! - Psst! Check the little icons to your right!