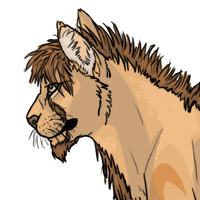 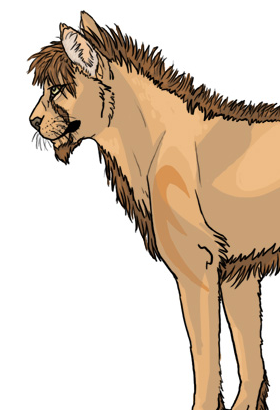 Leader of the pack.

Ao is an old character I uploaded just for fun: the other created species I had as a kid, besides the Sielaxen, were the Maridadi. These cheetah-like desert predators have a bony spike at the end of their long, tufted tails, which they use while hunting as a club to stun their prey. Maridadi are not physically strong and don't have especially large or strong jaws, but they are very quick and can turn on a pin, so they use this to their advantage, running past their prey and turning fast enough that their tail whips the animal brutally.

As desert creatures, they are large-eared and short-furred, with thicker fur running down the tops of their spines, under their bellies, behind their feet and between their toes, and under their chins, for protection and warmth at night. All members of the species are in tawny tans, browns, or creams, with curvy markings on their shoulders, different on each animal. Maridadi aren't sentient like the Sielaxen are; these are just animals.

Ao was the species mascot. He had a mate (Ue) and a cub (Yi), but I don't plan to upload them. There were numerous other Maridadi I made for friends!

I am sure the species was partly inspired by my friend alaitallon's Rhodri species. :')