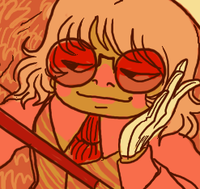 Despite his diminutive stature, he can be a threatening man. Highly manipulative and determined, he is a collector of strange curio. An entrepreneur by trade and philanthropist by nature, a very affluent and prestigious man who is by no means unfamiliar with the seedy underbelly of the business world.

Mockingbird has a youthful, slender silhouette, with his head framed by long flowing blonde hair with bangs. He wears clothing that could best be described as somewhat foppish, and he doesn't mind being described as effeminate or decadent, he'll be dressed to the nines before you find him wearing anything less casual than a waistcoat. He favors warm hues of purples, oranges, yellows and neutral tan or beige. One of his most recognizable accessories are his tinted glasses, usually matching with whichever attire he's presently wearing. Another would be his white gloves which he never takes off, unless the situation calls for it. He is also always seen with a cane, that he might gesture with while talking.

He speaks in florid patterns and will go out of his way to use fancier words when there's an opportunity to. He will give people pet names, and make them like it. He tends to straddle the thin line between endearing and patronizing in his speech, but he'll never insult anyone without a good reason. (He much prefers to be passive-aggressive, go figure.)

In personality, he is mostly amiable to those who interest him but also standoffish if you do not strike his fancy or if he can't use you to reach his goals. In short, he's a narcissist utterly devoid of empathy with few scruples regarding the well-being of other human beings. People interest him as objects to be collected and used as toys or tools to further his own goals, and not much else. Additionally, he has an ability to hypnotize people simply by touching them, and he usually only turns to this when he realizes there is no other way to bend people to his will...

This is what makes him an especially insidious person to deal with. Should he as much as gently brush off of you, depending on what ideas he wants to plant in your head, your mind will unconsciously adopt said ideas.

The intensity of his touch as well as whether his commands are internal or verbal also affect the strength of the hypnosis, not to mention that people's minds are individual, and it's hard to tell how easy someone is to manipulate when first establishing contact. Some people have surprisingly strong mental boundaries while others will be like warm butter in his hands with little effort.

To describe the process, when he first touches you, you will feel a warm sensation flushing through your chest, as though you're being touched by someone you're fond of and thus leaving you exposed for his manipulation. This sensation will linger for a while even after he no longer touches you, and depending on the intensity, it might make you think about the ideas he introduced into your head until the sensation eventually fades, leaving you initially wondering what you were thinking until it's entirely forgotten like a dream you forgot to write down.

He is also able to use proxies, which can be objects or people he's touched, but this way the hypnosis is significantly weaker, also depending on the proxy's mental malleability as well as the final target's receptiveness. For instance, he can use his cane to keep his target at a safe distance from him while also establishing contact.

How he implants ideas in your head is unknown, but when they show up, they feel just as natural to you as any other thought, unless they go too harshly against your defined boundaries. At times, he will be able to break these boundaries, and causing a twofold trauma: one from breaking these mental boundaries and another from committing acts that go against these mental boundaries. This, however, matters little to him, and if he loses the ability to control a target due to extreme trauma, he'll view these people essentially as "broken" and might leave them as they were or dispose of them.

All in all, he can be very dangerous to deal with, so great care must be taken when dealing with him.