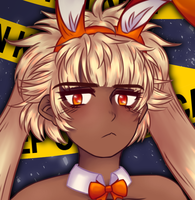 Angel spends her time hopping shitty bar jobs in hopes to gain an income to support her irresponsible gaming habits. She has a tiny apartment furnished with a kotatsu, cardboard boxes for furniture, and an incredibly expensive gaming rig. Once spent her entire paycheck on a game's gacha to get the item she wanted and had to beg for rent to be delayed. She also refuses to run air conditioning and has fans constantly on, no matter the weather. She has various friends over to slam beers with and play MOBAs with in traditional LAN parties. Hates cleaning so she chooses to throw out cardboard boxes that get dirty instead of maintaining furniture, along with not having the funds. She enjoys working out and has a solid body of muscle, though she doesn't look it due to her love of beer and meat. She's regularly seen with her hair bleached in twintails or a long ponytail, and a tank-top with shorts while at home. She's quite masculine and likes to hang out with male coworkers.

Her current job is at a dingy bar that makes her dress in various costumes to serve bar patrons, her outfit of choice being a bunny suit. The pay is good enough to support her habit, so she's not found a reason to leave besides plenty of creepy patrons. She has a great boss who allows her to hit them with her serving tray for it anyways, so it's a win/win for her. She has a liking for her (female) boss, past just a professional and friendly friendship, more towards idolization.

If you say her name in a way to make fun of her, she won't treat it well at all. She has a hot temperament, and is overtly stubborn and passionate. She's friendly until her buttons are pushed, and she would do anything for her friends. She can't get along with overly sensitive people. She's known to switch moods quickly and regain her normal state just as fast.