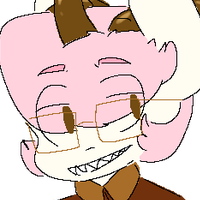 Always smiling, Sundae comes off as friendly. He looks out for people, he resolves conflicts, he keeps himself above the mire of drama and stress. In a word, Sundae is smothering - but really, isn't that so rude to say? Let him take your coat off for you; have a seat, a cup of hot chocolate. He'll handle your stress for you.

Blessings are a way for a Magnitude Fragment to imbue a lesser Fragment with extra magic, for whatever reason - perhaps to assist them in battle, or as a reward of sorts, or just to prove a point. Not every Mag Frag does such a thing, but every Mag Frag has blessed at least one Fragment.

Sundae is the sole and only receiver of a blessing from Pyatiugolnik, the pentagon structure and the most powerful of all the Mag Frags. This has considerably boosted Sundae's raw magical prowess and other abilities, instantly marking him as one of the most powerful Fragments and giving him an invitation to the ranks of the Overseers, which Sundae had happily accepted.

Rather than downplay his achievements and act as if he's not as skilled as he is, Sundae is fully aware of his limits (as high as they may be) and isn't afraid to remind people that they're dealing with a walking nuke of Magninium. He won't flaunt it, but most problems can be easily solved with a gentle(?) reminder that he could murder everyone in the room ten times over in fifty different ways.

Unfortunately, even though Sundae is a powerful Fragment, he still isn't capable of holding his own against the Mag Frags, and Pya's Blessing has placed a major target on his back. So much so, in fact, that Sundae unwittingly attracted the attention of Rendgen. Nobody is exactly sure what happened - Sundae never speaks of it - but he briefly went missing, presumed kidnapped by Rendgen. When he turned, Sundae was changed - no longer outwardly aggressive about his powers nor eager to show them off: he became withdrawn, paranoid, and anxious. Simply, traumatized.

After a short period simmering in the aftershocks of his trauma, Sundae suddenly announced that he would be leaving the Coalition of Reality. This alone was not strange news; sometimes Fragments took breaks from the COR or needed space alone to recover.

No, what was concerning was the massive amount of Fragments who had joined him.

Sneaking behind the other Overseers' backs, Sundae had convinced a group of Fragments that they no longer needed to guard the Timelines. He argued that they did not have to follow an assigned purpose when their gods - the Magnitude Fragments - were so unwilling to help and comically incompetent at times. They were not merely created to be the pawns cleaning up the greater being's messes. They could leave and live their own lives, free of the control of the COR, living like the mortals did.

More Fragments left with Sundae than expected, travelling to a Timeline of Sundae's own construction that he called the Haven. With a powerful burst of magic, Sundae sealed the Haven off, preventing anyone from getting in or out without his blessing. The other Overseers initially panicked, for fear that Havenites would attract the attention of the Shards.

Some members of Research & Remove still attempt to seek out the Haven in order to figure out where exactly it's located, so that the COR doesn't accidentally attack, assuming it's Shard interference. Sundae is uncooperative.

Within the Haven, Sundae rules absolute, guiding over the members who followed him. He divided the world up into different Realms; small pocket realities sitting next to each other with different rules and aesthetics per. He appointed Administrators to serve as proxies between himself and the citizens, keeping Sundae up-to-date on what they wanted.

Satisfied, Sundae slipped into an overbearing, but well-meaning parental figure role, finally feeling safe and secure from what had traumatized him before. Rather than becoming furious with rebellers, he tends to bemoan that they should know better, they're smarter than this, he's so disappointed in them. The guilt-trip tends to work and the Haven has fallen into a quiet sort of existence, separated from everything and everyone else by his magic.

Sundae is happy. He's safe, and so are all the other Fragments he cared about. What more could he ask for?

Sundae superficially resembles a Kirin, although he's a Fragment and can change his appearance at will. The insides of his wings are leathery, while the outsides are feathered, and the feathers curl in somewhat over the tips of his wings. Three horns adorn his head - two curling back behind his ears, and one emerging from the top of his head and curling slightly. He also has sharp teeth and thicker eyebrows. His tail is long and thin, ending in a clump of hair that discolors the fur leading up to it.

He can be drawn grinning, usually with his eyes lidded. Sundae can also be drawn alongside any members of the Haven, usually looking after them or appearing somewhat menacingly. 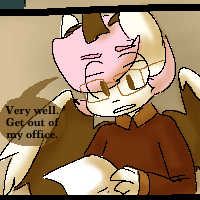 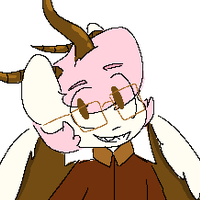 • Favorite color is pink
• Favorite season is Autumn
• Favorite memory is....
• Doesn't eat, but out of politeness "pretends to" (just magicks the food away)
• Strongest sense is hearing
• Strongest taste is sour
• Ambidextrous (taught)
• Isn't ticklish
• While working as an Overseer, Jubilee was his favorite coworker
• Rendgen (really, any Mag Frag) could break apart the seal locking the haven in a second. Sundae is aware of this and doesn't think about it often due to the panic it gives him
• Chews on pens and pencils when in deep thought
• Hands out pins to people when he feels they've done a good job
• Sometimes assumes alter-egos and pretends to live in a Realm for a while
• Would be mildly sickened if someone had a crush on him