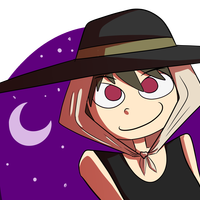 Species: Human Dark Mage (her family is full of dark mages on her mother's side which  means that their genetics have been altered by a blessing from Voidstar  which makes learning dark magic easier and giving them a certain set of  visual traits)

Appearance: Pale skin and red eyes, typical colors  for her race. Dark brown hair is also not uncommon. Her usual attire  involves a dark colored dress a silk cloth wrapped around her head flat  shoes and a gardening hat.

Skills: Knowledge of flowers and plants, knowledge of different cultures and  history of Lore, knowledge of Voidstar and the Plane of Darkness,  necromancy, dark elemental magic.

Mother: Audrey Lancaster- a  powerful necromantress who died when her daughter was six. Nicky looks  up to her, but doesn't know much about her due to her untimely demise.  Is unaware of how she died or who killed her. Though she wrote a letter  to the Emperor about it when she was twelve, she never received a  response, and assumed he was too busy.

Father: Julius Radcliffe- an  old swordsman and former mayor of Moonridge. Was reunited with her  father met when she was twenty. After an awkward first few weeks,  Julius, desperate to make up for lost time became set on spoiling her  the best he could. Nicky excepted her father's generosity and the two  quickly for a tight bond. After Nicky was called away by the  Shadowscythe, they two continued to communicate through letters and she  returned to look after her father when she got word of his declining  health.

Personality: Perky witch who excitedly shares her  knowledge and stories with everyone. She is very experienced with the  theoretical, but doesn't have much experience due to her primary and  assigned profession becoming outdated by her country's constant warfare.  As a result, she is very naive when it comes to unforeseen difficulties  others may have come to expect. The concept of betrayal being something  she would never expect out of her own people due to the strong sense of  loyal ingrained in her from childhood. Despite her loyalty, she is also  very open minded and sees the good sides of foreign ideas and concepts,  makes her a skilled ambassador.

Dislikes: Rain (though it's  good for plants it makes everything smell terrible), having no one to  talk to (she's a chatterbox), cooking (she's terrible at it) and animals  (they don't like her much either)

Backstory: Born from a secret  affair between a necromantress and the then mayor of Moonridge. Her  father was adamant about having a boy and so gave Nicky a male name  despite her having been born a girl. Her mother found the name amusing  and didn't object to it. Because of the mark the relationship would have  left on his political career if the affair went public, the  necromantress left Moonridge when Nicky was young and she didn't meet  her father until she was much older. As a child she asked her mother  about him, but she forbade her from seeing him until Nicky was at least  as tall as she was.

The necromantress, being an ambassador and  advisor in an aggressive and isolated Empire, who's leader had little  desire for her services, was dissatisfied with her position. In exchange  for power within the Empire, Nicky's mother made a deal with the  Mysterious Stranger, betraying her leader and replacing him with  Sepulchure she she worked closely under until her death at the hands of  Lynaria. At the time Nicky was living in her mother's cottage in the  rural outskirts of Amityvale and was raised by her left over undead  minions. She spends the next decade indulging her interests and reading  everything she could get her hands on.

At 16, she joined the  Temple of Darkness and became a sister, learning a crude form of the  language of darkness as well as the history and culture of the elemental  planes. Having been a child when her mother died, she had already used  up most of her inheritance before becoming an adult and the priesthood  didn't earn her enough to sustain her lifestyle (they believed lacking  material goods would bring you closer to Voidstar). Devoted to her  faith, but unable to give up her other passions, she leaves the Temple  (on good terms).

With all the money left over, she attended  Necro U after she turned 18, but left after two years due to not being  able to afford the tuition and not being skilled enough for  scholarships. She is disappointed she is unable to match the skill of  her mother, and sells her cottage in order to get the money to travel  and find herself. She eventually makes her way to Moonridge where she is  taken in by guards after giving her name and meets her father for the  first time.

Happy to have found family for the first time, she  decides to stay, her father lending her some money in order to start a  flower shop on the condition that she not perform dark magic while in  town. After paying her father back, she buys more books attempting to  learn necromancy on her own.

A few years pass uneventfully until  Sepulchure announces he will launch and attack on Swordhaven and kill  the Champion of Light. Having every faith the Emperor will succeed, she  uses her connections to make her father an honorary brother of the  Temple so that he would be saved once the world was consumed by the  Plane of Darkness. After Sepulchure's unexpected death, she is called  upon by Empress Gravelyn to act as advisor and ambassador to the Empire,  as her mother once filled the role.