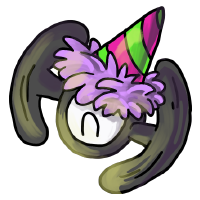 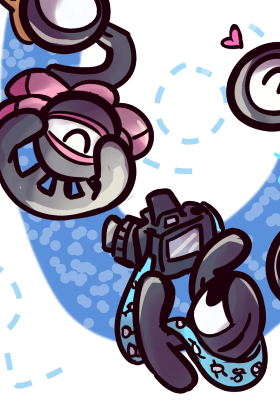 Me as a long-suffering letter H.

I'm feeling nostalgic, so here's my Voice-sona, so to speak.

From 2014-2015, I, along with a lot of wonderful people, drew fanart and fan comics for Twitch Plays Pokémon, a collaborate attempt to play Pokémon games via the (thousands of) members of a Twitch chat room entering inputs that would control the player characters. The bizarre and erratic antics of the characters we controlled spawned volumes of funny lore and epic stories to explain everything that happened on stream, and some incredible stories were told (and some lifelong friends were made-- and one future wife).

Of course, I'm not an epic kind of person. Instead of telling stirring tales of gods and 'mon, I made silly comics about the "Voices," a gibbering, idiotic pack of unowns who represented the users playing the game: in my comics, they "guided" the player characters-- or pestered them, or haunted them. Regardless of the relationship with each particular "host", these kids were stuck with the Voices from the time they were "chosen" to the time we beat the game and they were "released" from their possession. The Voices could never agree about anything and often made horrible, stupid choices with tragic consequences for the player character and their Pokémon, but the Voices did always have the player character's best interest in mind-- well, most of them, anyway. Like any group of people, they were fickle and often cruel, but sometimes surprisingly kind, and when they worked together toward a common goal, they could be awe-inspiringly powerful.

Anyway, the Voices usually presented themselves to their hosts as unowns (to put a friendly face to the eldritch legion that was about to control their life for a couple of weeks), and so I had a lot of fun sticking sneaky little cameos into the comics by representing certain people's usernames with the unown letter that starts their name. Occasionally, that meant me, too. I was an H unown who was sometimes dancing or interested in music, or something like that-- and when my actual self needed to be represented in a meta sense, I was the Voice "reporter," holding a camera and wishing everyone would just stay still for a picture (sometimes shiny because my good friend Sorceress_Feraly actually gave me a shiny H unown named after me).

My TPP comics are here, from newest to oldest (they definitely make more sense if you were there at the time, but I think many of them are still fun anyway).