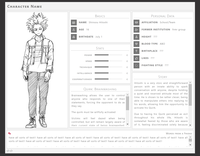 code can be found here

-- if you are using o1. Night Mode [$5] by lowkeywicked --
add the following to all text in the quirk, story, and words from a friend section to make it legible:

Brainwashing allows the user to control anyone who responds to one of their statements, forcing the opponent to do as they say.

The quirk must be willfully activated

Victims will feel dazed when being controlled, but will remain largely aware of their current state of being brainwashed, despite looking completely spaced out. They are rendered essentially caged in their own bodies and feeling helpless all the time, until the brainwashing effect breaks. Those who end up brainwashed will be forced to follow all of Hitoshi's commands, however, any orders that require them to think or talk will not work.

Hitoshi is a very stoic and straightforward person with an innate ability to spark conversation with anyone, despite holding a quiet and reserved attitude most of the time. He is shown to be rather clever, being able to manipulate others into replying to his words, allowing him the opportunity to activate his Quirk.

Due to having his Quirk perceived as evil throughout his whole life, Hitoshi is somewhat feared by those who are aware of it, feeling discriminated solely because of his ability. This led him to become resentful of those who had Quirks more associated with Hero work. Regardless, Hitoshi desires to become a Hero more than anything, with a deep longing to disprove those that doubt his heroic intentions. Not only does he want to refute those who shame his abilities, but he also aspires to usurp students who walk the path towards becoming a Pro Hero, as he wished to.

Words from a Friend