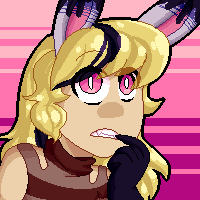 Quiet and calculating, Lorelei likes to observe everything going on around her. She plays everything as safe as possible.

She's very sweet and has a kind and optimistic demeanor, though a lot of her optimism was squashed out of her by her induction into the cult. Although she still tries to move past what happened, it's always looming in the back of her mind.

At least... so long as she stays in the cult.

Lori grew up on a planet away from Earth. There, she was raised learning about all the planets she could one day find a host in. Sort of a coming of age ritual for her planet. She fell in love with the planet she was taught about called "Earth," and, when it finally came time to visit another planet, she and her friend, Orchid, made a b-line to earth.

Unfortunately, the duo landed their spaceship a little too close to the cave of the Cult of Lacrima. The Lacrima members saw the aliens and, due to their code of ethics, if a new species is discovered, they must test the effects of the stone on them. Lori and Orchid were taken into the cult's sacrificial coliseum and were presented with two humans for them to kill so they could be initiated into the cult. However, Lori and Orchid refused, so the cult locked them in prison. The duo were tortured and kept in solitary confinement for months as the cult tried to convince them both to become initiated, however, after months of refusing, the cult leader had had enough. She took the dainties into the coliseum, gave them each a knife, and told them that if one of them didn't kill the other, the cult would pick one of them to kill at random.

Fearing for her life, Lori attacked. The two fought for a few minutes before Lori overpowered Orchid, killing her. Her blood activated the blood tear and Lori turned into a cult creature.

However, Lori was overcome with grief and guilt over the death of Orchid. She became closed off and stayed locked in her room for months. Until, one day, something in her mind clicked. She knew that the higher ranking in the cult she became, the more likely it was that she could some day leave the cave and escape. So she pulled herself together and pretended to be 100% on board with the cult. All the while keeping her true intentions locked in the back of her mind...

Lilly
Host
Lilly has always been the most supportive friend to Lori. They met shortly after Lori's initiation and they've been the only things keeping each other sane in the hell that is the Cult of Lacrima.

SEBAStian
Acquaintance
Sebastian seems to notice how unhappy Lori is, but, while he always seems sympathetic talking to her, he never does much more.

Orchid
Best Friend
Orchid was Lori's childhood friend. The two thought they shared an unbreakable bond, however, Lori ended up betraying Orchid in the cult, eventually becoming the cause of Orchid's death.

Mina
Cousin
Lori and Mina have always been extremely close. The two were raised together and Mina going to earth herself is part of the reason Lori decided to come down to earth when it was time for her to find a host.
cs by pajuxi | code by vom
View More