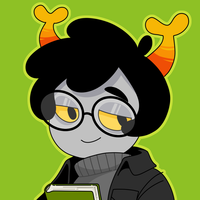 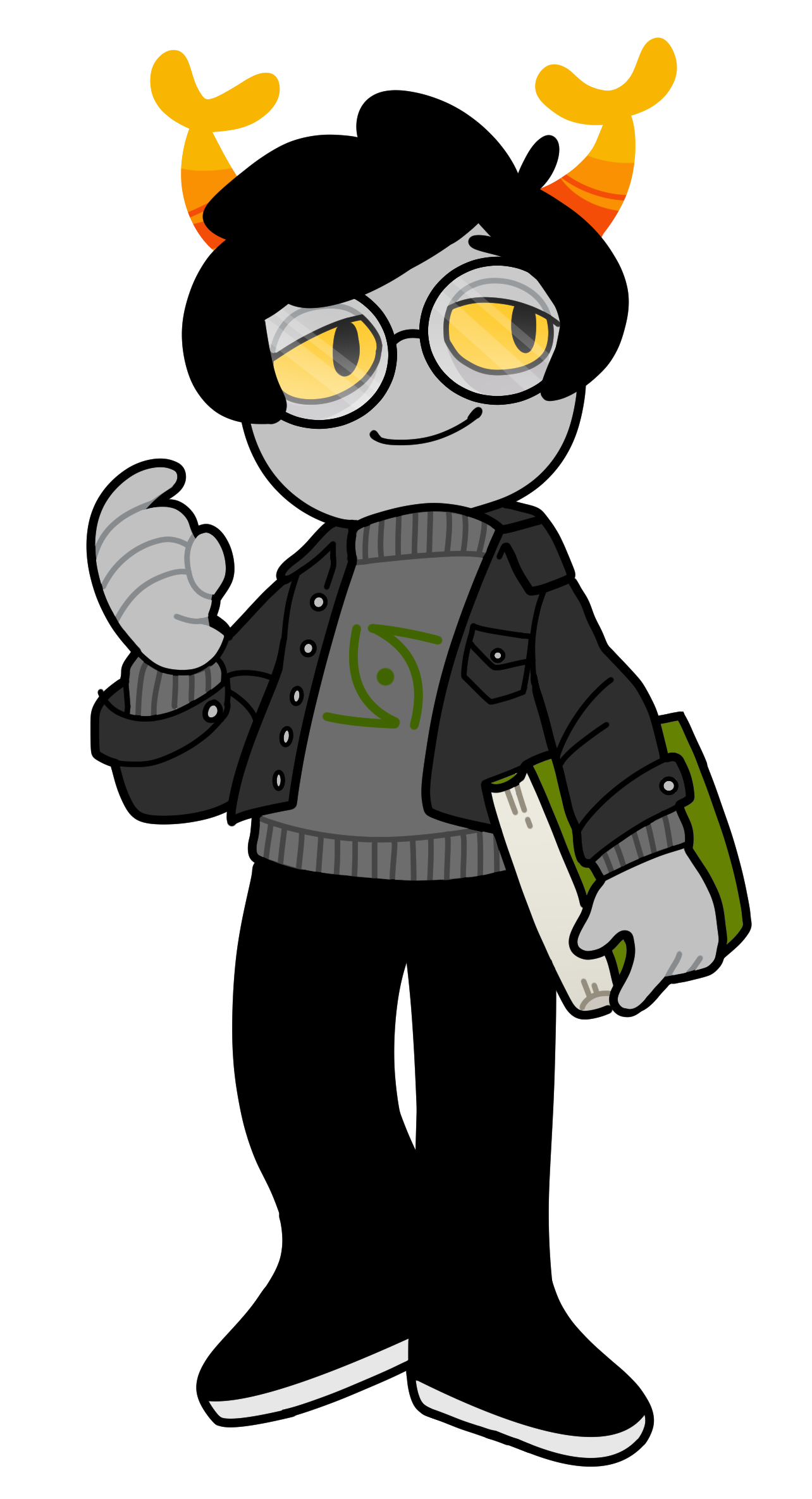 Wiltho Avidel is a 10 sweep old troll that works at the front desk of their local library. To avoid being discovered as a Lime blood, Wiltho pretends to be an Olive blood and has changed the color of their symbol to match as such. The only reason they haven't been discovered and slaughtered is because their personality renders them practically invisible.

Wiltho is an extremely mellow troll, who agrees to almost anything and lets others do what they want. This is not to say that they don't have their own wishes or emotions, but they have learned to become so passive in order to avoid attention and never, ever make a fuss. This has led Wiltho to lead a fairly lonely life.

Perhaps their personality is completely different. Perhaps they're actually a passionate, dramatic troll, and has trouble hiding or lying. But that nature has been so thoroughly repressed for Wiltho's own safety that it may never see the outside world again.

The Biology of Lime Bloods

We all know that there are no living Lime bloods in Homestuck. To quote from the Wiki:

"Lime Blood was once a very common blood caste on Alternia, but was hunted to extinction by the others due to its members' possession of powerful abilities that threatened the authority."

I believe the powerful ability that Lime bloods held was a capacity for empathy unlike any other troll caste. Their empathy and calming nature make them incompatible with violent troll society, and Lime bloods exert an aura that is extremely subduing. This power is so strong, it may even be able to negate the violent power of subjugglators under Her Imperious Condescension.

If this effect sounds familiar, this is because my secondary theory concerning Lime bloods is that they are not completely extinct... but they are farmed for their blood for it's use in sopor slime. Sopor slime is frequently used in recuperacoons to "assuage the terrible visions of blood and carnage that plague the dark subconscious of [the troll] species," but can also be consumed to the effect of soporific drugs. It is unknown how a Lime blood would potentially escape such a fate, but surely it is not impossible...

Lime Signs are tumultuous, bringing great emotion and creativity to their endeavors. They are resolute in their decisions; if they are going to do something, they do it. They have a tendency toward melodrama, especially when they feel passionately about something, and their bad moods are loud and usually difficult to conceal. Hiding their feelings does not come naturally to them, so many Lime Signs cultivate a hard outer shell to hide the passionate, caring person inside. Lime Signs tend to have a large group of friends-they draw people to them with allure and the promise of excitement, and are usually unaware that they are doing it. They tend to focus on their own flaws, rather than their good points. Although they are exceedingly kind and empathetic individuals, many Lime Signs posses a mean streak. If you catch them on a bad day, they can be incredibly vicious. But it they take care to use their power for good, they make very loyal companions. Romance is extremely important to Lime Signs, and when they fall, they fall hard. They don't take rejection well, and a breakup can send them into a tailspin requiring an extended period of recovery.

Marked by a flexible optimism, the personalities of Prospit Dreamers are reactive and intuitive. They naturally exist in the present, rather than look to the future or obsess over the past. When making decisions Prospit Dreamers tend to rely on gut instinct and whatever emotions they are experiencing at the moment. This makes them quick to act and reliable in a crisis, but it also can make them capricious. They have trouble thinking things through, and their feelings toward specific situations and decisions can change from day to day. They solve problems with creativity rather than cold logic, often seeing multiple options with ease and clarity. Because they generally take things as they come, Prospit Dreamers are less rebellious than they are adaptable-instead of struggling against authority, they will find a way to coexist with it. Possibly because they are so instinctual and flexible, they like having a defined set of rules-a safety net for their passionate lives. Naturally trusting, they have trouble with deception or hiding their true selves, and will often worry about what others think of them. The self they project into the world is often not under their control.

Those bound to the aspect of Hope are driven first and foremost by their convictions. They do right for right's sake, and are quick to come to the aid of anyone they deem to be experiencing injustice. That said, their views of the world can be quite black and white, so what they see as the "right" thing may not always be the universally accepted view. They put great value in the power of the imagination, the ability to dream up a better and more beautiful future. If anyone could dream a better world into existence, it would be one of the Hope-bound. They may sound like all sunshine and rainbows, but they aren't adverse to a little destruction, especially if they think they can replace it with something better and more just. At their best, Hope-bound are positive, caring, and warm. At their worst they can be narrow-minded and selfish.

[ acquaintance ] Oxiwan is a semi-frequent visitor of the library, who stops in to... well, mostly to kill unsuspecting lowbloods. He receives book recommendations from Wiltho afterwards. Wiltho has taught him to read most long words.