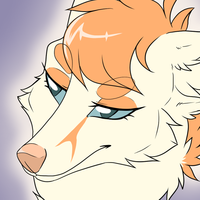 "Is life a blessing or a curse if there are no more surprises?"

Meet Jing, a grumpy god who doesn't believe in people.

Jing used to be a powerful village protector warding off natural disasters and evil spirits, but as time passed and the village turned into a modern city, their shrine was eventually forgotten and abandoned. And then a coffee shop was built over it.

Jing's well-being isn't affected as long as the shrine statue is intact. To ensure what little remains of the shrine doesn't get bulldozed over, they (angrily) worked their way up into owning the coffee shop the mortal way.

Jing isn't an entirely forgotten (demi) god, although they wish they were at this point. They occasionally get prayers that ring in like e-mails on their cell phone (deities gotta keep up with the times) and they exasperatedly can't do much about it. A prayer is part wish and part action, and these people have seem to altogether forgotten they need to offer tributes or take action along with their wishes. Rules are rules and according to Article G9, Clause 9-17, direct divine interference with mortals is a big no-no. Jing can offer guidance but without the mortal's effort in the prayer, Jing's powers are completely useless.

Originally a long-lived fox, Jing began deityhood with no concept of gender or even name. They grudgingly started going as "Jing" ("Spirit" in Chinese) because coffee shop patrons would not stop asking. Jing's real form is a small golden fox. They usually transform into a person for mortal dealings as to not spook the locals, but choice of appearance is usually determined by Jing waking up and saying "Today I feel like an old grandma/little boy/pretty lady/grumpy man!" As a result, the locals believe the coffee shop is run by a busy family because there's a Mr. Jing and Mrs. Jing and Jing Jr., and Ama Jing and A-Gong Jing..., but only one of them ever shows up at a time.

As per kitsune lore, Jing is not above leaving poops in annoying customers' shoes.