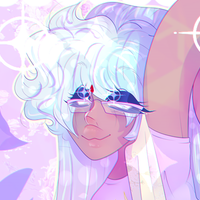 is an elastic woman (boneless, if you will), a Dalit of a  scheduled tribe of scheduled caste member of the "Other Backward Castes" in Jharkhand, India.

Mina is significantly older than her face makes her look - the very infrequent statements placing her birth somewhere between 1605 and 1720, during the Mughal Empire. Her light grey hair certainly wasn't the color she was born with - even if her light grey irises were. Her face is no exception to her stretchy skin, though, so she tends to behave the age people interpret her as. Her niece gets another grandma. The idiot cat-caller on the street? Too aggressive and he'll get somthing.

She is currently married, but her husband Uddyam - not her first - works with a touring tent (movie) theater, which keeps him away for post of the year. He at least writes home, sends most of his earnings. Both were glad neither really wanted children after their arranged marriage. Extended family was enough.

Mina is a saree weaver, using a hand loom. While one might think her capable of some rather elaborate patterns, being able to manage each thread - and she is capable of it - it is a lot quicker to weave and sell local commodity patterns.

The past few years, Mina has tried to participate in local yoga competitions, but been refused - except by occasional special invitation, which means she's not actually competing. Which, incidentally, means she never wins any recognition, or progresses to larger competitions. Supposedly because her seeming lack of bones is more a monstrosity than a talent - certainly not because of her caste. Or not being Hindu.

Emotionally, Mina tries to be pleasant but reserved. She's done all the stupid stuff she can think of. She's attracted all the fame she cared to have, and lost it all in subsequent generations.  She calls cell phones "wireless phones" and understands that society advances faster than she can keep up with it. So it's better to blend into the background then attract ire, or the wrong attention. Usually.

Mina's powers somewhat mimic those of Ms. Incredible/Elastigirl of The Incredibles, Or Kamala Khan of Marvel Comics. Four? notable variances being;

Mina is in Noncompetitive.