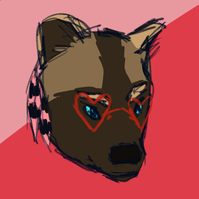 Stephen's been playing guitar since he was 12. He got interested after his classmates started making bands together, and since Stephen wanted to join he picked up the guitar.

During the next year of High School he met Damien, and the two started up a small band after finding a drummer (Gregory) and bassist (Johnny).

After graduating High School the band started playing a lot more often, having made a name for themselves. He met Julie through her hanging out at their shows often and the two hit it off.

Julie introduced Stephen to Craig, and the two started dating.

Two years later they broke up, and a year after that Craig died in a car accident. The band had also been broken up due to Damien's mental health issues, and Stephen no longer had anything to do.

After about half a year Julie, together with Colby, asked him if he wanted to join Colby's band, seeing as he needed a guitarist. Stephen joined the band at 21, and after a couple years they went viral.

At 25 Stephen's touring together with Colby.