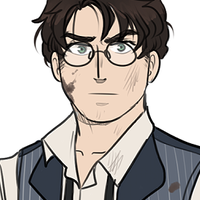 " The world is disease and danger after darkness and violence.. "

Joseph has always been a smart kid with a good heart, and his studies and time spent abroad have made him well behaving and polite even to extreme measures, but don't let his behavior fool you since he's hard working as anyone and won't shy away from heavy labor or those in need. He used to be quite optimistic and kind, but due some life experiences he has gotten more pessimistic and anxious often welling in self doubt.

Joseph was born into a simple worker/farmer family, but his interest never followed his familys footsteps but instead his interest geared more and more towards reading and learning and he has always had strong interest on figuring out how things work by taking them a part and seeing what makes them do the things that things do, like his fathers poor old pocket watch.

His family never was the most wealthy one, but they got along alright, and as he got older his parents decided that he should put his smart head and kind heart into good use and they started saving so that Joseph could transfer to a proper medical school once he was 18.

Leaving his previous life behind Joseph transferred to his new school into a big city which was absolutely overwhelming for him, but his eagerness to learn was greater. He did write to his parents whenever he had the time but along the years the letters started coming fever and shorter, it's not like Joseph didn't care but his new life started to become busier and more hectic.

After finishing his studies in five years and working for three for sake of wanting to pay back his parents and help them out, he finally wrote a long due letter: he was finally coming home.

But once he reached Willow Springs he found his old home empty,scorched and raided by some outlaw gang and his family nowhere to be seen which broke his spirits as he finally found the graves of his parents, but his sibling still nowhere to be found which caused a obsession to find them in him moving from place to place  asking anyone if they had seen them, using what ever money he had hiring searching parties, making posters and so forth until he had no more. This caused him finally to settle at local hotel, now year later, earning what ever he can as a stall mucker, contemplating his life choices.