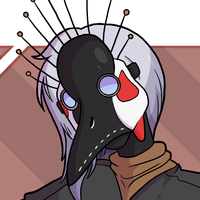 A plague doctor of many towns and hierarchies. He treated people near the end of the Black Death, around 1480's however, not in the ways people believed were right. Dr. Artamos is a well hired plague doctor, who fails at keeping people alive and actually experiments on the patients he gets. He enjoys that and believes he can actually heal the people he works on, passing's result in a fail and he must start over. He's loves flaunting his work however and isnt afraid to share what he's done. Labeled The Butcher in many towns due to his practices...he's usually kicked out of towns or more or less, chased out, even being called a murderer.

Dr. Artamos lost his loved ones to the plague. He took on this job for them but he doesnt have much of a life outside this so he just continues his travels to "heal".

-Clothing: His clothing and mask represent that of an African Crowned Crane. He's quite proud of it and thinks he's Beautiful.
-Normal Appearance: Underneath the outfit he looks younger than his actual age. Clean pale skin and long bleached white-ish grey hair. His eyes are icey blue and the corner of his right lip is cleanly scarred from a scalpel.

Has a bad habit of if someone passes under his care, he puts them up on display somewhere to show people what can go wrong.

He is a germaphobe and will wear wrapped clothing to keep bodily fluids from touching his skin.
Delusional and believes he's really healing the sick. Fast to jump to this conclusion. Screams mean nothing.

- Main tools of the trade is a Scalpel and Toxic Remedies. Uses it on patients to "heal" them.
- Legit thinks he's helping people and can comprehend death but only as mistakes.
- Goes house to house. Doesn't tend to stay in one place for long.
- Murderer of many, but doesn't think wrong of his work.