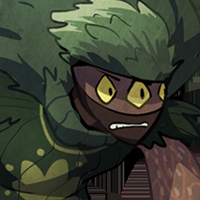 He barely has any idea what an orientation is, much less what his is.

Fighting, blood, being watered, gentle music, animals (if they don't try to nibble at him anyway), traveling, s'mores without the marshmallows, storms, Polly, making friends (though he wouldn't admit it), discovering/learning new things, cool rocks, kids (though he doesn't know how to deal with them), eating paper (secretly), nice watches (though he doesn't wear them).

Marshmallows, anything that's sticky or gooey really, failing, himself, fire, dry heat, beds or pillows that are too soft, the cold, winter, hunger, being patronized, having too much time or space to think.

Yuudai is perpetually large and angry. He's easily irritated and is already bitter enough about pretty much everything. He hates a lot of things, but mostly himself. He's a really self-conscious person who takes a lot of things to heart and beats himself up with them whenever possible; he feels like he just messes up whatever he touches and will never succeed at anything.

Yuudai wears his emotions on his metaphorical sleeve, making it clear when he's upset or angry. Though much of his anger is a seething self-loathing, he's also got plenty of explosive bursts of it to share. He speaks loudly and with a scowl, making it hard for him to make friends. He's trying to work on calming down overall, but it doesn't come easily to him.

Despite his bitterness, Yuudai values others over himself even though he'll act like he doesn't. He has the impulsive desire to protect others, so even though he seems unfriendly he'll always try to help someone in need. He'll just vehemently deny he had any altruistic intentions.

"You're making a huge mistake. Turn back while you still have your life."

Yuudai used to be the protector of a forest in a faraway Hell. He would consume the blood of the humans who entered the forest and threatened to harm its ecosystem, redistributing their soul energy through the earth and leaving their corpses to provide for the earth. He trained the other denizens of the forest - including other jubokko like him - to protect themselves and their brethren, leading to a peaceful existence that lasted for many years.

One day Yuudai received an invitation to Hell College. Eager to become stronger and more educated about the world beyond the forest, he accepted and ventured off to campus. It was an enjoyable experience overall, though he always struggled with the more intellectual parts of school. This fault led to him failing his finals and being banished into the Hellscape, forced to kill an alumni or faculty member in order to be allowed to retake his finals. This was a crushing blow to him, as he had worked hard for years only to do badly on some tests and not even get the chance to fight the Underkings. He took out his anger on the Hellscape's many dangers, often mistaken for a common monster himself.

Eventually he met a bard named Polly, who used her music to calm him down like any other monster she approached. Being forced to have a clear mind for once helped him settle down, and he wound up befriending Polly and becoming her protector. Though he'd like to graduate and find a way back home to continue protecting his forest, for the time being he, Polly, and many other Hell College failures have made a home outside of Hell College, protecting each other and forming small but bustling communities.

Yuudai is a jubokko: a tree that grows on battlefields and other sites where many lives have been lost. He's absorbed a countless number of souls, giving him a more humanoid form and a human mind. He needs to feed on blood to survive, and human blood is especially satiating. Fortunately, just normal monster blood is enough to suffice when human blood isn't available. He absorbs blood by piercing flesh with his hands and sucking the blood through them, though he can also sprout branches from his body to aid in this. He also consumes souls through this method, but he has to completely drain someone of blood (AKA kill them) in order for the soul to be drained as well.

The branches of a jubokko have incredible healing powers, but the branch has to be given to one willingly. In other words, if you just rip off one of his branches and run it's not going to do you any good. Polly has one, and every once in a while she'll convince him to part with one for the sake of injured travelers and friendly groups.

Yuudai has an incredibly fast healing factor, enhanced strength, can change the appearance of the flora around him for camouflage or to otherwise fool others, and can telepathically communicate with plants or plant-like beings. Despite his plant-like nature, it's interesting to note that he bleeds the blood that he's absorbed over time.