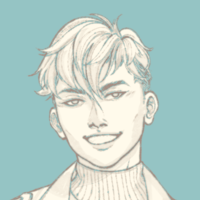 This is a WIP. I've yet to fully flesh out this page.

Mathieu stands at a towering six feet—taller than the rest of his siblings, but not as tall as their forebearer. His raven locks are styled in a messy undercut and his fringes dangle long enough to cover his downturned, bright sapphire eyes. Like his siblings, he has ghastly white skin, but his penchant for afternoon strolls make his complexion a little more sun-kissed. Ornate Japanese tattoos ridden with koi, waves, and sakura run through the sleeves of his arms and his bare chest, while a snake circles around his neck like a snug collar with chrysanthemums scattered about. On the other hand, a two-tone bomber jacket with a red gingham pattern covers most of his tattoos, and his plain white sleeveless undershirt heavily contrasts with the somber, dark shades of his jacket and his ripped, acid-washed jeans. His black, calf-length combat boots are laced in a peculiar manner—they're tied in a "zipper" fashion and are short of being laced by three eyelets from the top. Three pairs of earrings—one of which are tunnels—don his pierced ears, though an additional industrial, helixes and a daith are fashioned on his right. Although hidden from view, Mathieu also has a tongue, navel, and pair of nipple piercings—all of which he isn't shy to admit having.

Mathieu sticks out from the rest of his family—the ever-so-musically-inclined Durands—like a sore thumb. Besides his "outrageous" appearance (for their parents, at least), his personality also makes him seem like the only "sane" member of the household. You see, Mathieu is quite the affable lad and his placid nature helped him view the world differently from how his parents and twin sister do, especially concerning the existence of demons. In fact, his open-mindedness earned him quite a number of peers and connections, and some others even refuse to believe that he's related to the mysterious and somewhat pompous Durands. His complaisant personality refuses him to think lowly of anyone and would rather be given the benefit of the doubt, even if it means being labeled naive. He also has a strong desire to be different and wishes to live life his way, even if it means going against his parents' wishes to major in music and going as far as studying abroad so he can pave his own direction with his career without their prying eyes. At present, he's a graduate of psychology and is trying to work on his masters program in behavioral and cognitive psychology while touring with his band.

Despite his gallant disposition, Matty is not a saint. His overall kindness has its limits and while no one has experienced his wrath firsthand so far, he nearly seems like a completely different person once his patience gets tested for far too long, or if anyone dares to attack his twin sister Mavis or his brother Mallory. In fact, he often jokes that his attitude when riled up serves as an inherited feature from his parents, thus making him a "true" member of his own family against claims that his tact makes him stand out from the rest of them. Nevertheless, he is quite forgiving and isn't quick to form grudges, even when dealing with demons or their human disguises. Mathieu has a personal belief that not everyone is as bad as they seem and it's better to judge someone on his own rather than rely on others' claims. While his way of thinking makes him tolerant and sympathetic, his siblings often deride and chide him for his naivety, regardless of who's right or wrong in terms of their judgment.