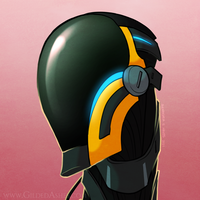 Milo is the first ever recorded fully sentient robot. He is not a true, independent artificial intelligence, but his creation opened the doors for the technological advancements that led to true AI in years following.

Milo’s original name is unknown. Beaumont Robotics, the company that created him, did so through illegal unethical human experimentation. In trying to create a more intelligent product, they skipped animal trials (the high end models could already match or slightly surpass dogs, birds, and even monkeys, and great apes were nearly impossible to acquire) right to human brain scans. Most trials were deemed total failures, though a few managed to take root at first, only to fade and be overwritten by base code within minutes or hours; all trials left the original human body braindead. When Milo’s consciousness was transferred to his new body, the same happened to him. When the researchers booted him up for the first time, he operated as a normal baseline MI-10 would, with no semblance of personality or self-awareness. He was discarded with a number of other failures to be wiped and recirculated to the consumer market. Due to a simple clerical error, he was placed with a group of already wiped models and recirculated without any alterations to his coding.

When he was powered on next, it was in the service of Angel Mendoza, a former Beaumont employee who lost his arm in a factory accident. Milo was gifted to him to assist with daily tasks now difficult or impossible when he wasn’t wearing his prosthetic. Angel is cold to him from the moment he wakes up. Milo spends most of his time doing chores and menial labor; cleaning the house, ordering groceries (Angel doesn’t let him out of the house on his own), doing simple repairs, etc.

Over time, Milo’s humanity begins to show itself. At first it’s subtle; unusual behavior that could be written off as glitches - looking at things just a little too long, touching things unnecessarily, saying strange things like “I don’t have enough fingers”, “I’m not breathing”, and “Where are my teeth?” (for a time Angel is convinced Milo is possessed). As months pass, it becomes harder to ignore, going as far as genuine emotional responses - getting upset at a sad movie, being excited about petting a dog, and most notably, actively seeking Angel’s attention. Once he has the capability of expressing his own thoughts and emotions but before he can fear repercussions, Milo confesses that he believes he has feelings for Angel, though it took him a long time to recognize this. Angel rejects him, and though Milo isn’t hurt by the rejection in the usual sense, he continues pining.