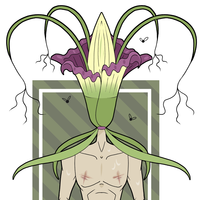 This is my Corpse Flower OC based on the Titan Arum "Amorphophallus titanum".

APPEARANCE: The body is an Agender human design with the head of the Titan Arum flower and 4 stems with the heads of the dead on each. The stems circles the plant in both directions similar to a carousel. Each head has a name and are animate. On this character, each head represents a different mood.

The blond burn victim is named, Faris. (Hyperactivity)
The jawless brunette is named Ouran. (Sadness)
The skull is named Molly. (Anger)
and the eyeless redhead is named Penny. (Happiness)

There are several versions of Titan all over the world and has different heads attached to the stems.
(Feel free to make a friend for this bab!!)