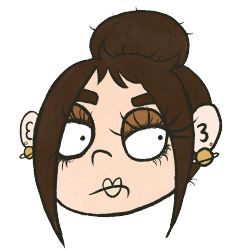 Chardonnay is more obsessed with BBM than you. She's horrible, rude and cannot apply foundation and often gets the wrong shade of maybelline dream matt mouse. She also nicks stuff from her sister which Kellie-Anne gets back at her for a lot, they're often fighting because of this. Chardonnay isn't a nice person at all and has been caught bullying alt kids for excising and LGBT kids. Shes a nasty piece of work.

Her reason for being such a bitch is unknown since she was brought up knowing better, the school often think its due to her being a middle child and pity her. When in reality shes a bitch for no reason.

Billy often stays out of Chardonnays way since she is an attitudey bitch to anyone, he especially doesn't like it when she causes arguments with his Mam or Kellie-Anne.

Kellie-Anne Sister/ Half Sister (who knows!)

Chardonnay is constantly begging Kellie-Anne to move out so she has a room to herself, she also always takes her stuff and never gets away with it.