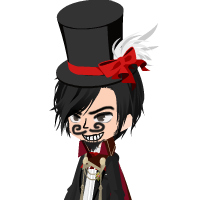 "Yes! It is I, Fellmund Narwhalt! Please hold the applause until I'm in a better position to steal your wallets - I mean, uh... Shush! None of you heard that! Now hand over your wallets and nobody gets hurt! I mean, hello! Yes, greetings, losers! Friends! Uhh... why are you all looking at me like that? I-I'm not going to rob you, d-don't worry! I just want to borrow your money and never give it back! Is that so wrong????"

Have you ever met someone so insufferable and annoying that you end up feeling something far above hatred and contempt for them? Like they were your eternal rival despite the fact you had just met them? Have you ever met someone who you wanted to punch within seconds of meeting them, like their face was just a natural magnet for your fist? If so, that person was most likely Fellmund. And your wallet is probably missing right now. Sorry about that.

Fellmund is a man who enjoys money above all other things. Except maybe his life, and himself. He kinda loves those more than even money. But the most important thing you need to know about him is that he is an absolute coward. Despite, of course, being arrogant and egotistical enough that it wouldn't make any sense at all for him to be cowardly. Fellmund wants people to fear him, despite being too incompetent to instill any form of fear. Fellmund wants to rob as many places as possible, but cannot stop announcing his actions, constantly being surprised to find resistance, as if he expected people to run away from the mere sound of his name. Fellmund is a man who constantly contradicts himself. And does he care? No, because he would have to be self-aware enough to even notice it.

As for a backstory, his backstory is: he was a rich boy who could get away with anything he wanted because his parents paid his way through school, and paid off any cops that might've gotten in the way. However, there was a couple areas he excelled in; namely, track and field, and chemistry. Eventually his family were outed in a public scandal due to trying to rip off other rich people, and Fellmund had to fake his own death. He got plastic surgery with the money from his parents' hidden stash in their family home. He took one of his minor hobbies - stage magic - and researched it heavily. Somewhere along the way a stranger offered him power in exchange for the last of his family's money, and he happily took the offer. The thing he cared about most at the time became the source of his newfound powers. Superpowers related to stage magic.

He can break through the laws of physics as long as it is something related to stage magic. He usually uses these powers to create trapdoors on any surface that allow him to teleport to the other side, create sentient cloth handkerchiefs, do some sick card tricks (including cards with knife edges) without actually touching the cards at all. He can keep an unlimited amount of items in his clothes, and is able to turn containers such as pockets into an infinite pocket dimension. There is a great many other things he can do, but these are the ones he utilizes the most.

He uses his chemistry to create various hand-made explosives, storing them in pocket dimension orbs of various sizes that he can easily fit in his infinite pockets. This includes smoke bombs, poison bombs, molotov bombs, and even bombs with enough firepower to blow a hole in thick steel walls. Though he can just teleport through such things so it's not like he uses those kinds of bombs often. Mainly because he can never remember which pocket he stores them in.